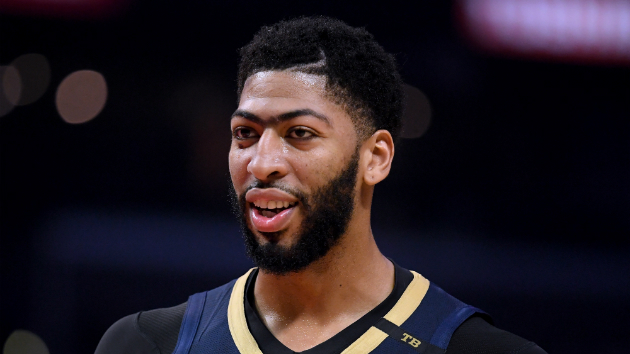 Harry How/Getty Images(NEW ORLEANS) — Anthony Davis will soon be back on the court in a New Orleans Pelicans uniform.
The team’s general manager, Dell Demps, announced in a statement Thursday evening that the center “will play the remainder of the 2018-19 season for the New Orleans Pelicans.”
The news comes after Davis, 25, informed the Pelicans nearly two weeks ago that he wanted to be traded and would leave as a free agent next year. Sources told ESPN that New Orleans had been considering keeping him on the bench in order to preserve his health as a trade asset.
“Ultimately, Anthony made it clear to us that he wants to play and he gives our team the best opportunity to win games,” Demps said in his statement. “Moreover, the Pelicans want to preserve the integrity of the game and align our organization with NBA policies. We believe Anthony playing upholds the values that are in the best interest of the NBA and its fans.”
“We look forward to seeing Anthony in a Pelicans uniform again soon,” he added.
Davis had been sidelined with a finger injury, causing him to miss nine games, but he has since been cleared to practice.
Copyright © 2019, ABC Radio. All rights reserved.