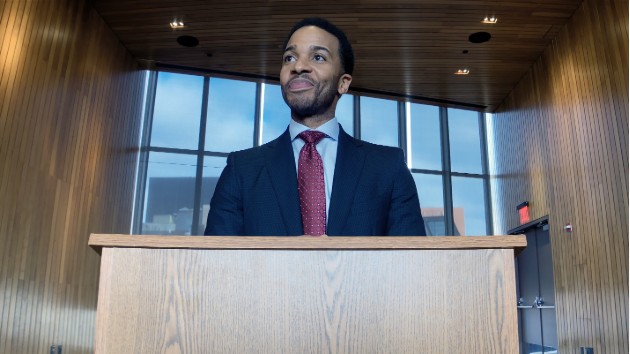 Netflix/Peter Andrews(NEW YORK) — André Holland had one burning question on his mind when he approached his new Netflix sports-drama, High Flying Bird.

The actor, who also serves as an executive producer on the film, plays Ray, a sports agent who has a bold solution during an NBA lockout. Holland tells ABC Radio his intention was to explore the idea of black ownership and what it would mean if black athletes took back the sport they made so popular.

"I think the big question that we asked ourselves is, 'What would it be like if all the black players in the NBA got together and said, 'You know what, we're going to start our own league'?" says Holland.

Holland also says the film is a response to the rhetoric aimed at NFL players who take a knee in protest of unarmed black shootings.

"'What would it be like if NFL players got together and said the same thing?'" he says. "'Will we still be arguing about the national anthem protests, or would there be space for that to exist?' You hear things coming out of a White House, or out of offices — 'Get those S.O.B.s off the field' and 'Shut up and dribble.' All these other things that to me feel wrong. That was the sort of question that we asked."

"Every time a lockout happens, as I found out through talking to different sports agents, there are always a group of people who say that, 'Well, what if we just started our own thing?'" he says. "Eventually people find their way back to the table before that idea really gets too far."