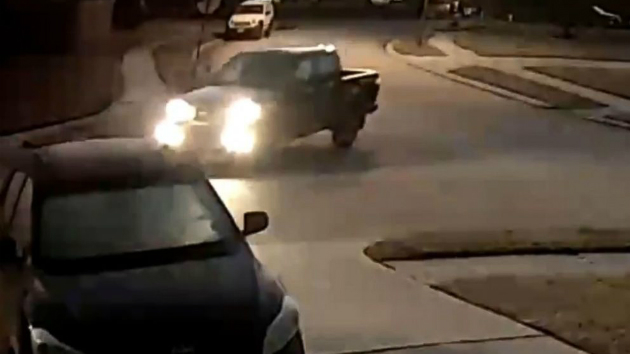 Harris County Sheriffs Office(HOUSTON) — After a young woman was gunned down in her own driveway in a crime caught on surveillance video, Houston authorities are pleading for help to get her "callous killer off our streets."
Elizabeth Barraza was setting up a garage sale when she was attacked on Friday, Jan. 25, Harris County Sheriff Ed Gonzalez said at a Wednesday news conference.
At about 6:55 a.m., the killer drove up to her home, walked up the driveway and engaged Barraza in conversation before pointing a pistol at her and shooting her multiple times, the sheriff said.
Barraza was hospitalized and died the next day, the sheriff said.
Barraza's killer — a "coward" — drove up just after Barraza's husband left for work, her father, Bob Nuelle, said at Wednesday's news conference.
Barraza was a "kind and generous person" and married to an "amazing man," Nuelle said.
She was holding a garage sale to make extra cash for her fifth wedding anniversary trip with her husband, Nuelle said.
"She had such a big heart," Barraza's husband, Sergio Barraza, said at the news conference. "I'm just so happy that the last words I got to say to my beautiful wife was, 'I love you,' and she said, 'I love you, too.'"
Elizabeth Barraza died in the same hospital where the couple had devoted so much time to volunteer work, Sergio Barraza said.
"Why someone would be so monstrous to commit an act like this… I had to trade our fifth anniversary for her funeral," Sergio Barraza said. "I ask if anybody knows anything to please come forward. … We need justice for Liz."
The crime and the suspect's car were caught on surveillance video.
Barraza's killer could be a man or a woman, Harris County Sheriff's Office Detective Michael Ritchie told reporters.
"We are almost certain" that the suspect's car is a black, four-door Nissan Frontier truck, Ritchie said, adding, "these trucks are not very common."
Authorities have received several tips, Ritchie said.
A reward up to $20,000 has been offered for any information.