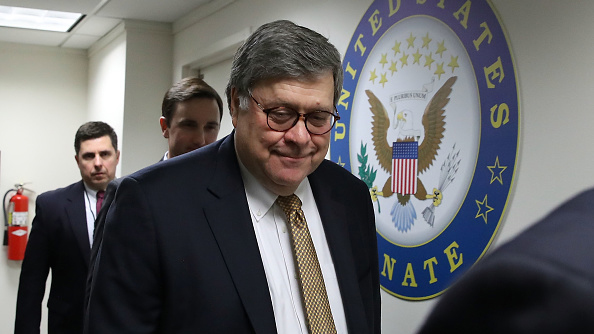 Mark Wilson/Getty Images(WASHINGTON) — The Senate Judiciary Committee on Thursday voted along party lines to approve William Barr's nomination to become attorney general.
All 10 committee Democrats voted to oppose Barr's nomination from advancing, while all 12 Republicans voted in support of President Donald Trump's pick to succeed Acting Attorney General Matt Whitaker.
The full Senate must now vote on Barr's nomination and Senate Majority Leader Mitch McConnell on Thursday said, "I hope and expect he will be confirmed next week."
Before Thursday's committee vote, Democrats said Barr had not given them the assurances they've sought that special counsel Robert Mueller's report would be made public once his investigation is finished.
The committee's top Democrat, Sen. Dianne Feinstein of California, said at the beginning of Thursday’s hearing that Mueller’s report “must be made public.”
“Unfortunately, Mr. Barr would not commit to providing special counsel Mueller’s findings and the final report to the Congress,” she said.
Other Democrats echoed Feinstein's view.
"Will he be the people's lawyer or the president's lawyer?" asked Sen. Richard Blumenthal of Connecticut.
Democrats, in voting no, also said they remained concerned about the role Barr will play in overseeing the special counsel’s investigation of Russian interference in the 2016 presidential election.
Barr has sought to reassure Democrats he thinks Mueller should be allowed to finish his work.
Judiciary Chairman Sen. Lindsey Graham, a South Carolina Republican, said that Barr "will share as much as he can reasonably can," adding that he trusts Barr and "begged" him to take the job.
GOP Sen. John Kennedy of Louisiana said that nobody should think Barr was a "political hack," but instead said that he reveres the law.
Former committee chairman, Republican Sen. Chuck Grassley, noted he had introduced a bill to make the special counsel's findings public.
Asked during his confirmation hearing in January under what circumstances he might fire Mueller, Barr replied, “Under the regulations, Bob Mueller could only be terminated for good cause. Frankly, it’s unimaginable to me that Bob would ever do anything that gave rise to good cause.”
And he said at the time he had made no promises to the president or been asked to make any.
But Barr has so far declined to guarantee that he would release Mueller’s final report in its entirety.
Democrats pressed Barr for written, on the record, answers about what he’ll be willing to share about the probe with Congress and the public. With Mueller's investigation now nearing completion, Barr’s answers take on even greater significance.
Committee Democrats, who have met with Barr in recent days, are also especially focused on a memo he wrote last year to Deputy Attorney General Rod Rosenstein about Mueller's probe.
In June 2018, concerning the president's firing of then-FBI director James Comey in May 2017, Barr argued to Rosenstein that any obstruction of justice inquiry into Trump based on the firing would be "fatally misconceived."
Democrats wanted to know why Barr wrote the memo and who else might have seen or known about it.
Barr addressed the memo controversy head-on during his confirmation hearing last month.
"I wrote the memo as a former Attorney General who has often weighed in on legal issues of public importance, and I distributed it broadly so that other lawyers would have the benefit of my views," Barr said in his opening statement.
Barr was questioned extensively both in his hearing and in follow up written questions from members of the Senate judiciary committee about the memo and his handling of the investigation.
On Thursday, Democratic Sen. Dick Durbin of Illinois said that while Barr might be a good person, in writing the memo, he seemed to be "telegraphing his pitch."
Barr also left open the possibility that he could object to efforts to bring Mueller up to testify before congressional committees.
Barr isn’t promising to allow the special counsel to testify before Congress if invited or subpoenaed.
In his written responses to senators’ questions, Barr would only say that he would consult with Mueller and “other [Justice] Department officials about the appropriate response to such a request in light of the Special Counsel’s findings and determinations at that time.”