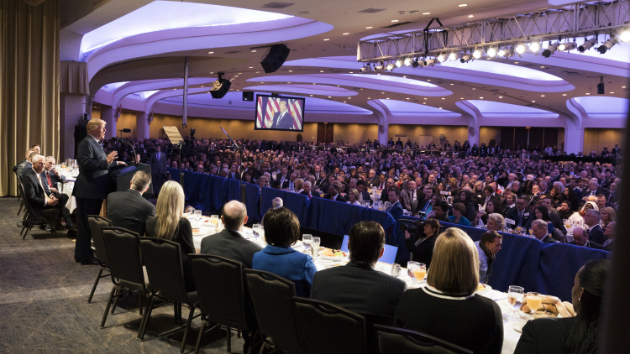 Official White House Photo by Joyce N. Boghosian(WASHINGTON) — Each year, a who’s who of pastors, politicians and business leaders gather in Washington, D.C., to break bread and bow their heads at the National Prayer Breakfast.
The annual event draws thousands from around the world to the nation’s capital and offers Christian fellowship and some good old-fashioned Washington elbow rubbing, too. The tradition of presidents attending was begun by Dwight D. Eisenhower.

On Thursday, President Donald Trump gave the keynote address to the evangelical event, co-chaired by Republican Sen. James Lankford of Oklahoma and Democratic Sen. Chris Coons of Delaware.
The president’s remarks focused on areas where the evangelical community say the president has delivered for them, which includes appointing conservative judges and taking an anti-abortion stance.
“Children, born and unborn, are made in the holy image of God,” the president said as the room erupted in applause.

“Every life is sacred and every soul is a precious gift from heaven, as the Lord says,” he continued, echoing comments he made in Tuesday's State of the Union address.
“My administration is also speaking out against religious persecution around the world, including against religious minorities, Christians, and the Jewish community,” Trump said, adding that he appointed a “new special envoy to monitor and combat anti-Semitism.”
At one point during his remarks, the president appeared to misspeak or misread from the Teleprompter and touted the "abolition of civil rights" as an accomplishment led by "people of faith."
"I will never let you down," the president said to the room.
Trump, a thrice-married, former playboy, has emerged as an unexpected champion for the evangelical community. Those in the evangelical community say they don’t mind the president’s past — or even his cursing and abrasive, sometimes-offensive online presence.
“He’s a fighter and he fights for things he believes in like the right to life – he’s not politically correct but he’s willing to take on the difficult issues,” Jack Graham, a Southern Baptist preacher and member of the White House Faith and Opportunity Initiative, said.

When people raise concerns about the president’s words and actions, Graham said he tells his congregation in Dallas, “Look at the actions not the reactions of the president.”
The night before the National Prayer Breakfast, the president and vice president hosted members of the event’s committee, including Pastors Paula White and Robert Jeffress and Coons and Lankford, to the White House for dinner. An attendee said the president touted his ratings from the State of the Union, the latest polling on evangelicals and also asked for input from people in the room on issues like human trafficking.
Evangelical leaders say the Trump White House frequently takes their temperature on important issues — whether its abortion, immigration or even Middle East peace plans. Multiple members of the White House’s Faith and Opportunity Initiative said they are in touch with the White House almost daily.

Jennifer Korn, deputy director for the Office of Public Liaison, works as the go-between the White House and evangelical leaders.
“We’ve never seen an administration more inclusive to the evangelical community,” Jentezen Franklin, an evangelical pastor, said. “It’s unlike any that many of us have been around have seen. We don't agree with everything he says or does, but [are] thankful for his policy — for being pro-life, and for a traditional family.”
Tony Perkins, president of the Family Research Council, was part of a small group of Trump administration supporters who went to a meeting on Monday at the White House to preview the State of the Union address. He said he gave feedback on the direction of the speech, and pushed for the president to take a strong stance on the “sanctity of human life.”
Perkins said that the White House understands that evangelicals helped Trump win in 2016, and they need to retain the evangelical base in 2020. According to an ABC News/Washington Post poll, 60 percent of evangelical white Protestants say they plan to support Trump in the next election.
This year at the State of the Union, evangelicals praised the president’s hard-line stance against abortion. In his speech, the president took direct aim at recent legislation passed in New York state which would preserve the right to have an abortion even if Roe v. Wade was overturned by the Supreme Court. He also blasted Virginia Gov. Ralph Northam for stating "he would execute a baby after birth."

A spokesperson for Northam said his comments, made to a Washington radio station last week, referred to a hypothetical instance involving physician decisions when the mother's life was at risk.
“I am asking Congress to pass legislation to prohibit the late-term abortion of children who can feel pain in the mother's womb,” Trump said. “Let us work together to build a culture that cherishes innocent life. And let us reaffirm a fundamental truth: all children — born and unborn — are made in the holy image of God.”
It was a message some evangelical leaders specifically hoped to hear, and they say those few sentences made a powerful impact.
“I’m just thankful he was willing to take that stand,” Franklin said. “It ignited his base perhaps greater than anything I've seen. I've been getting texts all day, phone calls all day.”
The small group of evangelical leaders enjoy unusual access to the White House.
White, Trump’s longtime spiritual adviser, said she has worked with the administration on issues like reunification and peace on the Korean peninsula. Other leaders say they are in constant contact with the Trump administration, from the White House to the State Department.
“You name an issue and people in the White House want to know our view point,” Graham said. “It’s the most faith-friendly White House, including the Bush administration. And not to name drop, but George W. Bush is a friend.”
Copyright © 2019, ABC Radio. All rights reserved.