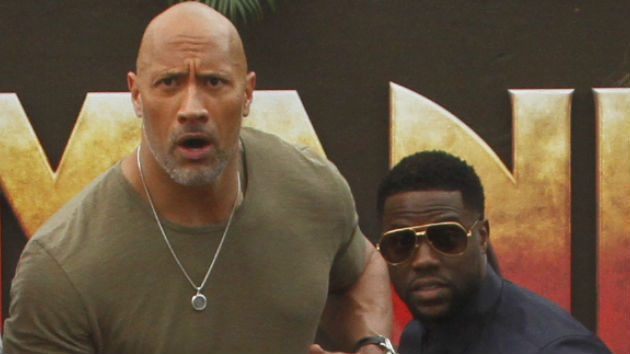 Shane Tegarden/© 2017 CTMG, Inc. All Rights Reserved.(LOS ANGELES) — Dwayne "The Rock" Johnson dropped a bomb Wednesday when he revealed that the Academy of Motion Picture Arts and Sciences actually offered him the opportunity to host the Oscars before it gave the gig to Kevin Hart.

What's not clear is whether or not Johnson's claim is just another example of him busting his his Jumanji co-star buddy Kevin's chops.

It started when a fan tweeted that Johnson should take over the hosting gig, which was vacated after Hart stepped down amid controversy.

Johnson responded, "…I was their first choice to host this year, and my goal was to make it the most fun and entertaining Oscars ever. We all tried hard, but couldn’t make it work since I’m shooting [the] Jumanji [sequel]."

ABC News asked Johnson's rep if the tweet was a joke, since Johnson and Hart often poke fun at each other via social media. There's so far been no response.

Hart gave up the Oscar hosting gig December after homophobic tweets he posted almost eight years ago resurfaced. In January, Hart apologized to the LGBTQ community, but declared he's moved on from the controversy.

As a result, this year's Oscars will have no host, marking the first time since 1989 that there won't be one central MC.

Earlier this week, a diverse array of Oscars presenters were announced, including Whoopi Goldberg, Tessa Thompson, and Awkwafina.