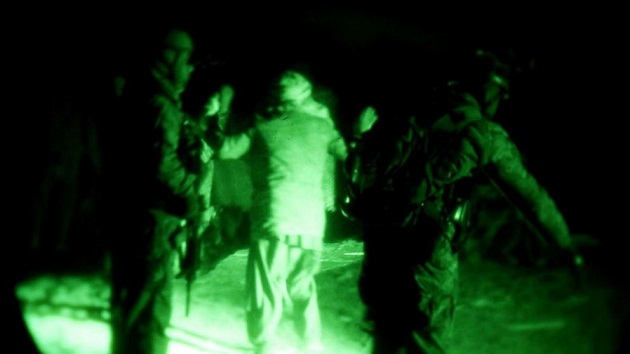 ABC News(NEW YORK) — In video shared with ABC News, Afghan forces can be seen storming a prison to rescue their own soldiers being held captive by the Taliban.
The night-vision footage of the raid showed Taliban fighters with their hands in the air.
ABC News and World News Tonight anchor David Muir visited U.S. troops in Afghanistan recently and spoke with top commander Gen. Scott Miller, who took ABC News to Camp Commando, a few miles south of Afghanistan’s capital.
There, U.S. Special Forces are training Afghan forces — it's a move that the military considers an important part of any possible endgame in the war in Afghanistan.
During the raid, which occurred in January, Afghan forces stormed the Taliban's Ghazni prison.
The Afghan soldiers lead the raid with support from coalition forces, according to a military public information officer. In the video, they are seen freeing the soldiers, who were chained to each other.
With support from the coalition and under Miller, Afghan forces are upping their fight against the Taliban.

Biden plays video games with family, shows off presidential ‘swag’ at Camp David
Man back behind bars for carjacking 16-year-old girl just 20 minutes after prison release
‘The Mandalorian”s Pedro Pascal, ‘Game of Thrones” Bella Ramsey to star in video game adaptation ‘The Last of Us’
Grassflat couple both facing harassment charges after fight about video
Black Americans lagging behind in COVID-19 vaccinations, data shows
“Is that viral?!” Dax Shepard reacts to video of daughter ignoring his dad dance moves