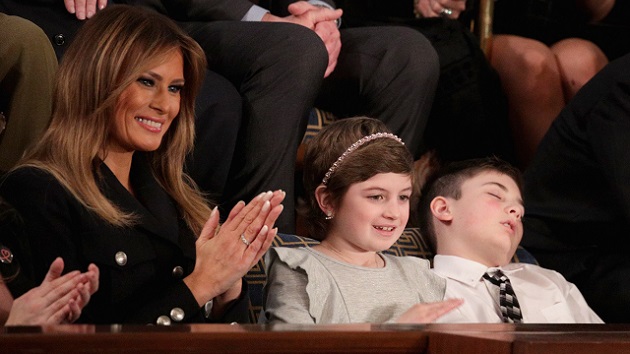 Alex Wong/Getty Images(WASHINGTON) — President Donald Trump had invited Joshua Trump as his State of the Union guest because the White House said the sixth-grader from Wilmington, Delaware, had been bullied because of his last name.
Dressed in formal white shirt and (loosened) tie, he had a prime seat in the House gallery — right there in the same row as first lady Melania Trump, who has made it her cause to stop such bullying.
He'd made national headlines because it isn't every day that an 11-year-old is the president's special guest at such an auspicious occasion.
The young Trump was making headlines again the day after, just as the older Trump was.
A photo getting prominent play in newspapers and on websites on Wednesday shows him, amid all the applause and the historic speechmaking, head back, sound asleep.
Copyright © 2019, ABC Radio. All rights reserved.