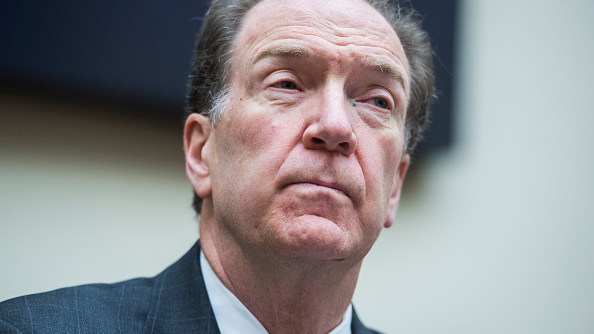 Tom Williams/CQ Roll Call via Getty Images(WASHINGTON) — President Donald Trump on Wednesday announced he would nominate David Malpass, the Treasury under secretary for international affairs, as the next president of the World Bank, a pick that has already generated significant backlash from supporters of the institution.
"My administration has made it a top priority to ensure that U.S. taxpayers' dollars are spent effectively and wisely, serve American interests and defend American values,” Trump said in the Roosevelt Room of the White House. “David has been a strong advocate for accountability at the World Bank for a long time.”
Since reports emerged of the impending nomination, several economists and global development experts have pointed to past statements Malpass has made critical of the World Bank and multilateral institutions more broadly.
In a briefing with reporters Tuesday, senior administration officials defended the selection and said Malpass would seek to improve and not dismantle or weaken the World Bank following the sudden resignation president Jim Yong Kim last month.
"David and the United States government support when we are participating in these organizations and they are fulfilling their missions and working efficiently and effectively," one official said. "I think the goal is to ensure that these institutions continue to serve the target — and in this case developing countries, and poor communities around the world most effectively."
But it's unclear whether those assurances will be enough to assuage Malpass's critics, who have framed him as yet another example of President Trump's efforts to undermine the United States' role in global institutions.
"David Malpass is a Trump loyalist who has committed economic malpractice on a wide range of topics, from dismissing the first signs of the 2008 global financial crisis to flirting with the abolition of the IMF," Justin Sandefur, a senior fellow at the Center for Global Development said in a statement. "His disdain for the World Bank’s mission of fighting global poverty rivals John Bolton’s respect for the United Nations."
Malpass has served under Trump and Treasury Secretary Steve Mnuchin since August 2017 and previously worked for the investment bank Bear Stearns as its chief economist for 15 years until its failure following the 2008 recession. Critics are now pointing to an op-ed he wrote for the Wall Street Journal in 2007 where he said the U.S. economy was “sturdy and will grow solidly in coming months, and perhaps years.”
Malpass oversaw an effort in the past year to implement new reforms at the World Bank, which provides loans to developing nations looking to invest in capital projects. He has also been a key player in the administration's efforts to reach a trade agreement with China, which officials said would continue despite his nomination.
President Trump has consistently railed against global institutions – the UN, NATO, the World Trade Organization. He campaigned on an "America First" agenda and since taking office has pushed for reforms at these global bodies, criticizing them for what he says are policies and structures that put the US at a disadvantage.
The president may stomp his feet about NATO members paying their fair share and he may pull the US out of international agreements like the Trans-Pacific Partnership and the Paris climate accord. But he was unable to truly shake up these organizations from within.
With this pick, Trump now has significant power to put his own hand-picked nominee in a key position where they can enact major reforms, scale back the World Bank’s operations and refocus the efforts to fight global poverty in a way that is Trump approved.
The bank's board still has to approve Malpass's nomination, and officials said Mnuchin has already been in touch with counterparts on the World Bank to ensure he is confirmed.
By tradition, the U.S. has selected the president of the World Bank while European nations picked the head of the IMF.
"We reserve the right for other countries to clarify their support for David as the process unfolds over the next month and a half," an official said.
Officials said Malpass was selected after a search effort spearheaded by Mnuchin and Ivanka Trump. The president’s daughter has deep ties to the World Bank. In 2017, she worked with Jim Kim to establish the Women Entrepreneur Finance Initiative (WeFi), a global fund aimed at empowering women entrepreneurs in developing countries.