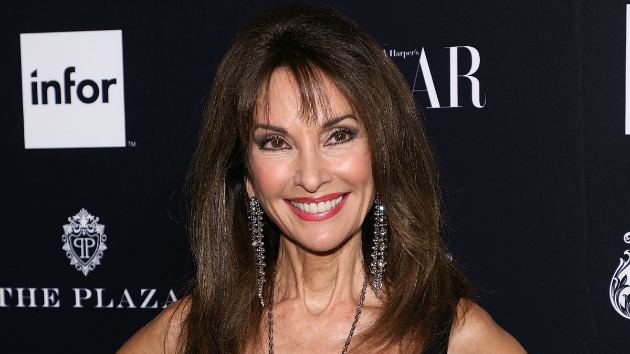 Taylor Hill/FilmMagic(NEW YORK) — Soap opera star Susan Lucci is opening up about a recent heart health scare in hopes of sharing a message with other women to “listen to your symptoms and act on them."

Lucci, who skyrocketed to fame for her role as Erica Kane, the matriarch on the long-running TV show All My Children, said she never thought she was at risk because she had spent no time in the hospital other than giving birth to her children.
Lucci revealed in an interview with ABC News' Good Morning America that her life recently took a dramatic, soap opera-esque turn when she discovered that by the time she was treated for her heart, one artery was already 90 percent blocked and the other was 75 percent blocked.
This past October, Lucci said she felt discomfort in her chest but ignored it, thinking, "It's nothing. It's gonna pass."
Then, she said she felt it a third time.
"I was actually in a boutique," she said. "And I suddenly felt what I had heard someone on a TV interview years ago, a woman says that she, leading up to a heart attack, had felt like an elephant was pressing on her chest."
The store manager immediately drove Lucci to the hospital, where tests showed she had two blocked arteries that would require stents to be put in that night.
"I was just shocked," Lucci told GMA, noting that if she hadn't done this, a heart attack was likely imminent.

"I thank goodness that I was not home because had I been home," she added, "I probably would've said, 'Oh, I just need to lay down. I'll have some water … then, I'll feel fine.'"
Heart disease is the number one killer of women, according to the American Heart Association, claiming more lives each year than all forms of cancer combined.
The disease came as a shock for Lucci because she said she eats a healthy diet and exercises six to seven days a week. She even spent a season working out on ABC's Dancing with the Stars.
Lucci said she later found out, "It was genetics for me, and stress."
"I asked the doctor, 'How is my heart? How is my actual heart?' And he said, 'Your actual — your heart is like the heart of a 20-year-old,'" she said. "He said it to me three times. So I believe him."
The health scare "shook me up," Lucci says. "It shook … my confidence in my health."
Lucci said she thinks people often dismiss notable symptoms for so long in part because "we are so busy."
"In a good way, nurturing the people we love in our family," she added. "We are not on our own to-do list … and you think it will pass. And truly, my symptom of the elephant pressing on my chest and radiating around my back did pass."
If there is one message she hopes others will glean from her health scare, Lucci said, "You just need to listen to your symptoms and act on them."
ABC News' Chief Medical Correspondent Dr. Jennifer Ashton noted that heart disease affects women differently than men, in part because their average heart size is different (men's hearts are about 11 ounces while women's are about 9 ounces), but also because the pathology is slightly different based on gender.
When it comes to symptoms of heart disease, Ashton added that women should look out for chest pain, nausea, vomiting, sweating, fatigue and shortness of breath.
If women experience any of these, they should assume the worst and seek medical attention immediately, Ashton added. She added that if you go to the emergency room, she recommends using the words, "I think I'm having a heart attack," because even medical professionals often don't think heart attack at first.
The good news, however, is that 80 percent of heart disease can be prevented with attention to lifestyle issues, according to Ashton.
Here are six lifestyle changes that can help prevent heart disease in women:
1. Weight management: Shedding off extra fat and unnecessary pounds will help reduce the burden on your heart, lungs, blood vessels and skeleton, according to the American Heart Association.
2. Not smoking: Smoking cigarettes is linked to a higher risk of developing cardiovascular disease, according to the AHA. The best thing you can do for your health is to quit.
3. Reducing stress: Stress can affect some of the factors linked to an increased heart disease risk, according to the AHA, including high blood pressure and cholesterol levels.
4. Being active: Daily physical activity and an active lifestyle can help increase the length, and quality of your life, the AHA states on their website.
5. Knowing your health numbers (Blood pressure, cholesterol, etc.): As high blood pressure is a major risk factor for heart disease, and high cholesterol can contribute to plaque (which can lead to clogged arteries), being aware of your numbers is an important step to take when it comes to owning your heart health.
6. Medication: Ashton added that it is important to remember, however, that many people can do all the right things but still need medication for blood pressure or cholesterol.