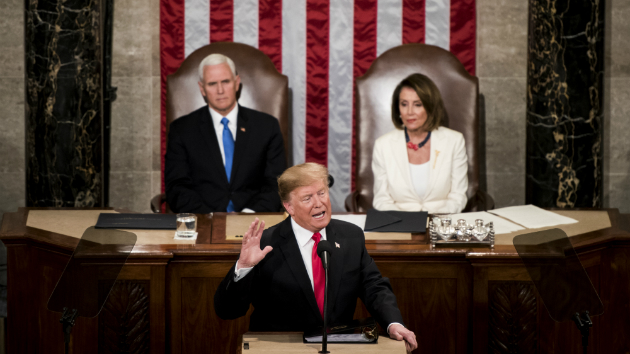 Bill Clark/CQ Roll Call(WASHINGTON) — President Donald Trump's State of the Union address was just under an hour and a half in its entirety, but there were several key lines that were memorable because of the vivid or telling reactions they prompted in the House Chamber.
Some touched on pivotal issues that have been at the heart of the administration's policy priorities, like building a wall at the southern border and working towards a better relationship with North Korea.
Others were more spontaneous, such as when the largely quiet Democratic female members of Congress — many of whom dressed in white to send a political message — took a moment to celebrate their wins in the midterm election.
Here is the rundown of some of the most notable lines:
1. When he brought up the investigations

"An economic miracle is taking place in the United States — and the only thing that can stop it are foolish wars, politics or ridiculous partisan investigations. If there is going to be peace and legislation, there cannot be war and investigation. It just doesn't work that way!"
2. A moment of bipartisan unity for criminal justice reform
"Now, Matthew is the very first person to be released from prison under the First Step Act."
The First Step Act was one of the final acts of the prior Congress, with a bipartisan bill offering reforms to sentencing laws.
Matthew Charles attended the State of the Union as one of the honored guests, and the president detailed how he was sentenced to 35 years for selling drugs. Trump detailed how during his time in prison, Charles participated in Bible studies, became a law clerk and mentored his peers.
3. Talking about the wall and pointing fingers
"In the past, most of the people in this room voted for a wall, but the proper wall never got built. I will get it built."
This is not the first time that Trump has made such a claim, but when Democrats have voted for a physical barrier along the border in the past, it was far different than what he is currently asking for.
The Secure Fence Act of 2006 called for the construction of 700 miles of fencing along the southern border, including enhanced surveillance technology, satellites, radar coverage and cameras.
The barrier was far less ambitious than the "big, beautiful" concrete wall Trump promised voters.
The legislation was part of the Bush administration's broader strategy for comprehensive immigration reform. And while the bill itself called for the construction of border "fencing," it also included a multi-faceted approach at securing the border.
The final vote in the Senate was 80-19.
Twenty-six Democrats voted in favor of the bill, including Schumer, the current Democratic leader. The final vote in the House was 283-138. Current House Speaker Nancy Pelosi voted against it. The legislation was signed into law by President George W. Bush.
4. The women of Congress take a stand

"No one has benefited more from our thriving economy than women, who have filled 58 percent of the newly created jobs last year. You weren’t supposed to do that. Thank you very much. Thank you very much."
"All Americans can be proud that we have more women in the workforce than ever before — Don’t sit yet. You’re gonna like this! And exactly one century after Congress passed the constitutional amendment giving women the right to vote, we also have more women serving in Congress than ever before. That's great, really great. And congratulations, that's great."
5. Controversial comments about abortion

"These are living, feeling, beautiful, babies who will never get the chance to share their love and dreams with the world. And then, we had the case of the governor of Virginia where he stated he would execute a baby after birth. To defend the dignity of every person, I am asking Congress to pass legislation to prohibit the late-term abortion of children who can feel pain in the mother's womb."
Trump was referencing embattled Virginia Gov. Ralph Northam's controversial comments about third trimester abortions.
6. Touting his presidential performance
"If I had not been elected President of the United States, we would right now, in my opinion, be in a major war with North Korea."
7. Slamming socialism

"Here, in the United States, we are alarmed by new calls to adopt socialism in our country. America was founded on liberty and independence — not government coercion, domination and control. We are born free, and we will stay free. Tonight, we renew our resolve that America will never be a socialist country."