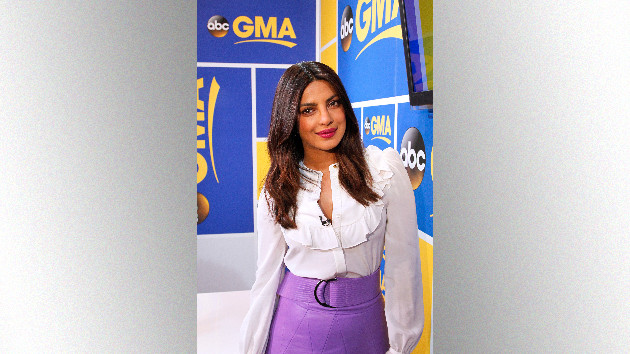 ABC/Lou Rocco(NEW YORK) — Priyanka Chopra Jonas is embracing married life with pop star and actor Nick Jonas. The two tied the knot last year with several elaborate ceremonies and receptions, starting with an epic celebration in Jodhpur, India last December.
In an appearance on Good Morning America on Wednesday, Priyanka opened up about the exciting time in her life and her many wedding celebrations.

"I wanted our wedding to be a very intimate affair," she said. "We had just about 200 people, which is very less for an Indian wedding – that's usually like 1,000 people."
One moment in particular from her big day stood out for her.

"Right before I was supposed to walk down the aisle — I remember them putting the veil on me. The veil was like 75 feet — I was like, 'I’m going to strain my neck muscles like the mother of dragons,'" she said.
"But I had a freak-out moment when I was standing right behind the curtains and they were going to tell me when to walk out and the music was going to start playing," she continued. "I just started having a panic attack and then the doors opened and I saw him. And I cannot forget that moment."

Priyanka also explained why the pair had so many different events to celebrate their union.
"In India you have so many people," she said. "My mother was like, ‘How can I not invite like my jeweler to the wedding?’ And I was like ‘Mom, we’re trying to keep it small!’”
"So we had to do a bunch of receptions for everyone and family and friends," she added. "I was just wedding-ed out by the last one."