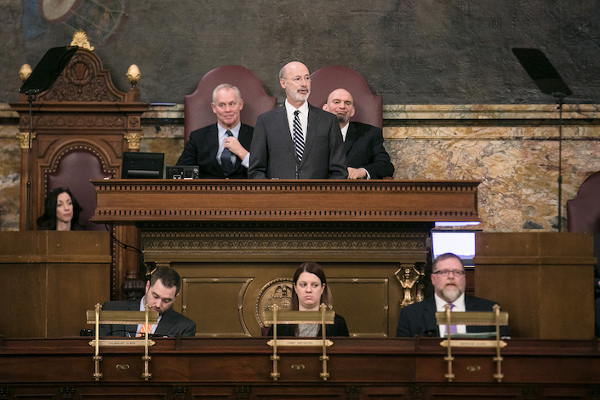 The State House and State Senate will have to workshop the budget before it eventually gets approved in July.

House Republicans say there are areas in the budget on which both sides can agree, but there is also a lot of work to still be done… especially, they say, with the fact that much of the funding would come from a severance tax on Marcellus Shale.

The governor’s budget would increase the state minimum wage to $12 an hour, increase funding for basic education, special education and pre-K, and raise new revenue through corporate tax reform.

According to Marc Stier, director of the Pennsylvania Budget and Policy Center, it also would invest $4.5 billion in state infrastructure, with a severance tax on shale gas.

“A severance tax simply just makes sense,” he said, “particularly in Pennsylvania, where 80 percent of our gas is shipped to other states, which means the tax wouldn’t even be paid by Pennsylvanians.”

Stier says Pennsylvania is the second-largest producer of natural gas in the country, but the only state that doesn’t have a severance tax on gas.

Supporters of the proposed budget say that, by using severance-tax revenues to pay back bonds to be sold over several years, the plan could appeal to legislators because it provides the means to fund improvements they’d like to see in their districts.

“Really critical infrastructure investments,” he said, “such as flood control, broadband internet, brownfield redevelopment that would create space where we can grow new manufacturing jobs in our older cities and towns.”

Stier said raising the minimum wage also would generate additional tax revenue, as well as reducing state safety-net expenses such as Medicaid and lifting thousands out of poverty. He said he believes even more could be done, and could be paid for through a so-called “Fair Share” tax that would cut taxes on the poor and middle class while raising taxes on the rich.

However, lawmakers from the Pennsylvania State House and State Senate will both have to approve the budget before it can go into effect on July 1.

That means Republicans and Democrats must work together to find a budget plan that works if they want to avoid another budget impasse similar to the one that stalled the state government in 2015.

More information is online at pennbpc.org.

Click below to listen to the report from Stier from the PA Budget and Policy Center for Gov. Wolf’s office.

Click Here to see and hear the responses from the Republican-controlled Pennsylvania State House of Representatives.