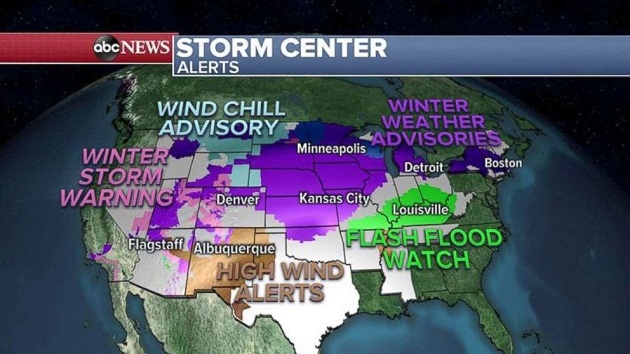 ABC News(NEW YORK) — Storms originating in the West are heading into the Midwest and Northeast and wreaking havoc, including travel delays and accidents, with ice, snow and flooding.
The Twin Cities slowed to a standstill Tuesday as parts of that metro area saw half a foot of snow, with other parts of the state, and parts of Wisconsin, receiving 10 inches.
On Wednesday morning, almost three dozen states are under snow, ice or flooding alerts, as freezing rain is hitting southern Wisconsin, northern Illinois and parts of Michigan. About 350 schools in Detroit are closed Wednesday because of the ice storm.
The western storms Wednesday morning now stretch from the Rockies all the way to the Ohio River Valley.
More snow is expected in Denver, with severe storms and flooding likely for the Plains and into Ohio. The Northeast is forecast to see freezing rain and a wintry mix.
Wednesday night and into Thursday, the second western storm will hit the Midwest with more snow in Minnesota, the Dakotas, Iowa and Wisconsin. Some regions could see 10 more inches.
Meanwhile, the areas south of there should see heavy rains, even with the second western storm being a bit milder than the earlier one.
Through the end of the workweek, some regions may get a foot of snow, with significant ice buildup in other areas.