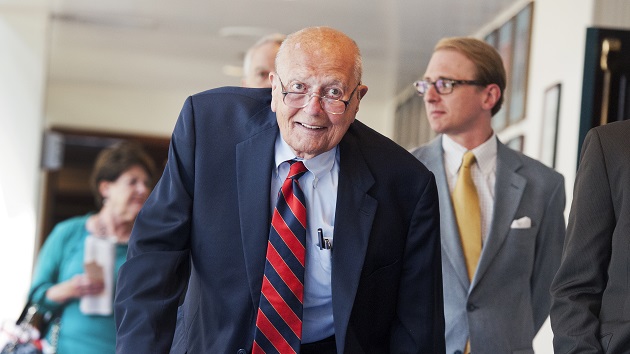 Tom Williams/CQ Roll Call(WASHINGTON) — Former Rep. John Dingell Jr., the longest-serving member of Congress in U.S. history, is receiving hospice care and has cancer, a source close to the family confirmed Wednesday, after his wife and successor, Rep. Debbie Dingell, announced he was entering “a new phase” of his life.
“Friends and colleagues know me, and know I would be in Washington right now unless something was up,” Rep. Debbie Dingell, D-Mich., revealed on her Facebook page. “I am home with John and we have entered a new phase.”
Dingell, age 92, is known to have been in declining health in recent months. He also suffered a heart attack last September.
“He is my love, and we have been a team for nearly 40 years,” the congresswoman wrote. “I will be taking each day as it comes. We thank people for their friendship and support, and ask for prayers and privacy during this difficult time.”
Debbie Dingell was not present for President Donald Trump’s State of the Union address Tuesday evening, prompting her to explain her absence. The two were married in 1981.
Dingell succeeded his father, John Dingell Sr., at age 29, taking office on Dec. 13, 1955, and serving 30 terms in the House of Representatives. He retired January 3, 2015, after a storied career inside the Capitol — particularly on the House Energy and Commerce Committee, where he served two stints as chairman.
House Majority Leader Steny Hoyer, who described himself as “a very close friend” of Dingell’s, said he spoke to Congresswoman Dingell on Tuesday, and that she “obviously is concerned” for her husband.
“John Dingell was one of the great legislators that has served in this Congress and certainly one of the great legislators that I’ve served with whose impact — clean air, clean water, consumer protections, financial regulations — he was a tireless advocate for the people,” Hoyer, D-Md., said. “John Dingell was a giant legislator on behalf of the people. I hope that he does better.”
Even in retirement, Dingell is also widely appreciated for his colorful humor, particularly on Twitter, where he has 252,000 followers and often ribs Republicans.
Dingell was drafted into the U.S. Army, serving from 1944-1946, achieving the rank of second lieutenant. He did not deploy overseas to a theater of war during World War II.
HarperCollins recently published Dingell’s memoir, titled, The Dean: The Best Seat in the House.
Copyright © 2019, ABC Radio. All rights reserved.