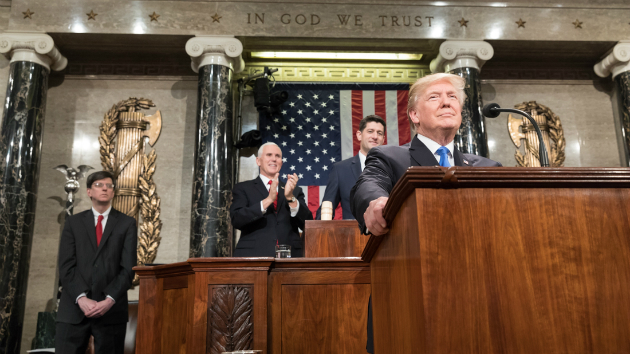 Official White House Photo by Shealah Craighead(WASHINGTON) — Will President Donald Trump declare he's building his border wall without congressional consent? Will he share a chilly moment with House Speaker Nancy Pelosi with the nation watching? Who will make a statement by merely being in the room?
As Trump prepares to deliver his State of the Union address Tuesday night, here are a few of the big things to watch for:
Next move on the border wall
Speaker Nancy Pelosi may have bested Trump in the 35-day shutdown fight, which concluded last month as the president reopened the government without receiving any of the funding he demanded for his wall, but the president insists that he will get the wall one way or another.
"I think there's a good chance that we'll have to do that," Trump said, referring to the prospect of declaring a national emergency to bypass Congress to build the wall.
He hinted that he may make an announcement on border security in Tuesday night's speech, telling reporters to "listen closely to the State of the Union. I think you'll find it very exciting."
The president is also not ruling out the possibility that he would shut down the government again when funding runs out Feb. 15.
Still, that option seems less politically viable just weeks after the president pulled out of the nation's longest government shutdown with no political victory to show for it.
Special guests
While the main event of any State of the Union is the presidential address, much of the spectacle has to do with who's in the room. Presidents and first ladies, as well as members of Congress, regularly use the speech as an opportunity to send an unspoken message with the guests they invite.
The White House has yet to reveal the special guests invited to sit with the first lady and be recognized by the chamber during the speech.
But some members of Congress have said whom they've invited.
Democrats are broadly trying to send a message on immigration, with many inviting Dreamers and DACA recipients. And two Democrats are taking former employees of the Trump Organization who were undocumented immigrants at the time of their employment.
Rep. Bonnie Watson Coleman, D-N.J., is taking Victorina Morales, and Rep. Jimmy Gomez, D-Calif., is taking Sandra Diaz.
Freshman Rep. Alexandria Ocasio-Cortez, D-N.Y., for her part, has announced she will be bringing as her guest a woman who famously confronted then-Sen. Jeff Flake, R-Ariz., in an elevator on Capitol Hill to plead with the senator over his vote for Supreme Court nominee Brett Kavanaugh.
Nancy Pelosi vibes
On Tuesday night, the president will enter Pelosi's House to deliver his address before a newly divided House chamber now controlled by Democrats. And throughout the speech, Pelosi will be seated just over the president's shoulder — a constant reminder of the new era in Washington.
Pelosi and Trump have not come face-to-face since the height of the government shutdown standoff last month.
The interaction and body language between them will be something to watch, as personal relations between the two have grown increasingly chilly, with Trump calling the speaker "very rigid" and "very bad for our country" in an interview with CBS over the weekend.
North Korea
Trump is expected to have his second summit meeting with North Korean dictator Kim Jong Un later this month, but an exact date and location have yet to be announced.
In a recent interview with CBS, the president suggested he may reveal those details in his State of the Union address. Trump went on to say that he's "looking forward" to the meeting and that he has "fantastic chemistry" with Kim.
And while the president's own intelligence chiefs said in testimony to Congress last week that North Korea is unlikely to part with its nuclear program, Trump maintains "we have a very good chance of making a deal."