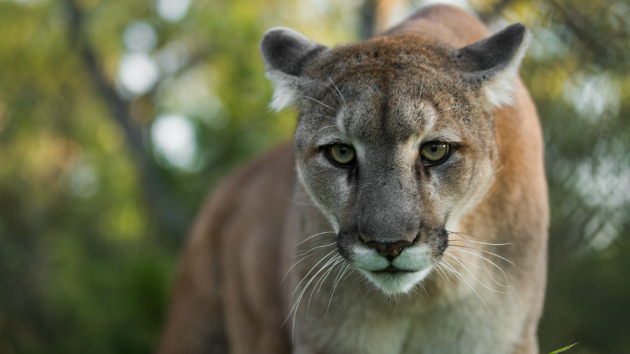 Ben Masters/iStock(FORT COLLINS, Colo.) — A runner killed a mountain lion "in self-defense" after the animal attacked him along a trail in northern Colorado on Monday afternoon, authorities said.
The unnamed man heard something behind him on the West Ridge Trail at Horsetooth Mountain Open Space in Fort Collins and was attacked as he turned around. The mountain lion lunged at him, biting into his face and wrist, according to a press release from Colorado Parks and Wildlife.
The runner was able to break free from the cougar's powerful maw and defend himself, killing the wild cat as a result. The man was then able to get himself to a local hospital, where he was treated for serious but non-life threatening injuries.
"The runner did everything he could to save his life," Mark Leslie, Colorado Parks and Wildlife's northeast regional manager, said in a statement Monday afternoon. "In the event of a lion attack you need to do anything in your power to fight back just as this gentleman did."
Wildlife officials later located the body of a young mountain lion on the trail near several of the runner's possessions. The animal was taken to a lab for a necropsy.
"Mountain lion attacks are not common in Colorado and it is unfortunate that the lion’s hunting instincts were triggered by the runner," Ty Petersburg, area wildlife manager for Colorado Parks and Wildlife, said in a statement Monday afternoon. "This could have had a very different outcome."
Fewer than 20 people have died from cougar attacks in North America in more than 100 years. Mountain lions are quiet, solitary, elusive predators that typically avoid humans, but it's important to remain alert if you're in an area where they live, according to the press release from Colorado Parks and Wildlife.
Copyright © 2019, ABC Radio. All rights reserved.