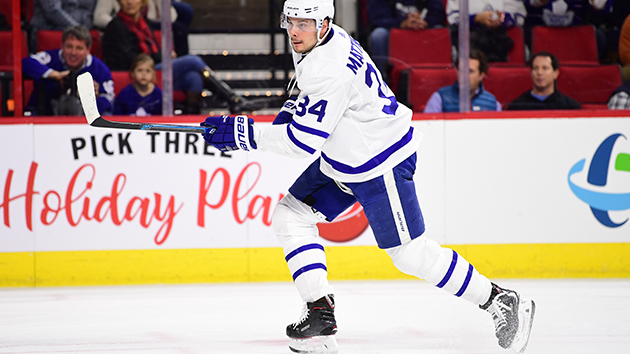 Photo by Phil Ellsworth / ESPN Images(TORONTO) — The Toronto Maple Leafs made 21-year-old star Auston Matthews one of the highest paid NHL players ever with a new five-year contract announced on Tuesday.
The deal keeps Matthews in Toronto through the 2023-2024 season, for a reported $58.17 million. He would have been a restricted free agent after the current season.
Matthews' $11.634 million per year is behind only Edmonton Oilers star Connor McDavid, who makes $12.5 million per season. The Maple Leafs also have the third richest contract in center John Tavares, who makes $11 million each year.
With 23 goals and 23 assists in his team's first 38 games, Matthews has lived up to the hype that has surrounded him since before he was the number one overall draft pick in 2016.
He is already a three-time All-Star, scoring 40 goals in his rookie campaign, and 34 in just 62 games last season.
Copyright © 2019, ABC Radio. All rights reserved.