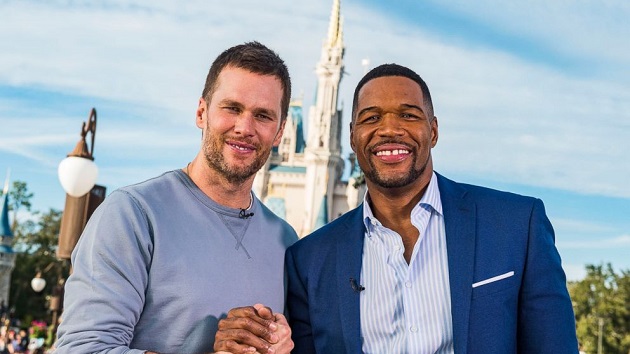 Disney(ORLANDO, Fla.) — Fresh off of his record-breaking sixth Super Bowl victory, New England Patriots quarterback Tom Brady says it still makes him "cringe" when people call him the "greatest of all time."
Brady, 41, opened up about his win at Super Bowl LIII and more in an exclusive interview with ABC News' Michael Strahan, saying despite being one of the most decorated football players of all time, he still doesn't like it when people refer to him as the "G.O.A.T." or "Greatest Of All Time."
"I don't even like it," Brady said. "It makes me cringe."
Brady explained that he is more driven by criticism than anything else.
"I wish you would say, 'You're trash, you're too old, you're too slow, you can't get it done no more,'" Brady said. "And I'll say, 'Thank you very much, I'll prove you wrong.'"
He added that he is always his own toughest critic.
"The personal criticism, I mean I think I'll walk off the practice field and be like … 'That was the worst day, you know, like get your mind right,'" he said. "Sports have always brought that out in me."
'I was never the first guy chosen': How the record-breaking quarterback stays grounded
Brady says he stays grounded in part because he was a self-described “late bloomer.”

“I struggled in college,” he said. “I struggled at the early part of my career … Like, I was never the first guy chosen.”
He still holds this “deep” within himself, he added. “And it’s not going anywhere.”

In response to winning his sixth Super Bowl, Brady said, "I don't know what to think … Other than I'm just blessed and I know that I'll be giving back for the rest of my life.”

He added that he hopes “to try to be in a position where I can be a good, positive role model” and “influence people the right way."
Winning the Super Bowl this year was 'the ultimate team effort'
During Sunday night’s lowest-scoring Super Bowl of all time, Brady admits that at times he was “getting a little bit frustrated.”
“Cause, you know, the first drive we throw the interception. It was a terrible throw,” he said. “We're at a opportunity to score to start the game, and it didn't go that way … fortunately our defense just held it down … It was just the ultimate team effort.”
Brady also spoke out about his special relationship with his wide receiver, Super Bowl LIII MVP Julian Edelman.
“We grew up five miles apart,” Brady said. “We’ve been together for so long. So I’ve shared a lot of life moments with him.”
“Not just on the football field but off,” he added. “He’s obviously one of my best friends.”

While Brady has previously said that he hopes to play until he is 45, he says he doesn’t think he will keep it up much longer after that.
“50s too long,” he quipped. “I think 45s the goal.”
His wife is his 'rock,' and 'Family is so important to me'
Shortly after Brady’s big victory on the field Sunday night, the father of three welcomed his daughter, Vivian, into the celebrations and carried her while she carried the trophy. If there is one thing he said he hopes his children will learn from watching him it would be to "follow their dreams.”
“To be an older player, you know, I love bringing my kids to training camp,” he said. “I love bringing them in the locker room after the game.”
“Football success is one thing, you know? Being a good dad, being a good husband, being a good friend, that's really important to me, too,” Brady said.
The legendary quarterback said he would describe himself as "an introvert.” He adds that he can run “on the field in front of 70,000 people” but “to walk into the mall, it would just freak me out.”

Brady said that his wife, Gisele Bundchen, is his “rock.”
“I married someone that … I know is my life partner,” he said. “She's just one of the most caring, nurturing people in the world.”
“The way she takes care of our family when I'm working, sacrificing a lot of her dreams,” he added. “I can only tell her I love her so much.”
“Family is so important to me,” Brady said. “My parents were there last night. My sisters were there.”
“It brings you so much joy when everyone's there to celebrate with you,” he added.
As for his wife, “She's got my back,” he said. “I have no doubt about that. And she knows I have hers.”
One thing Brady admits he could do a “better job of” for his wife, however, is taking out the trash more, saying he will improve on that “cause she deserves it, too.”
Also present during the big game was Brady’s mother, who just recently celebrated being two years cancer-free.
“We had dinner all on Friday night before the game,” Brady said of his whole family. “You know, it's just that's what life's about … Having these incredible memories with the people you love the most.”