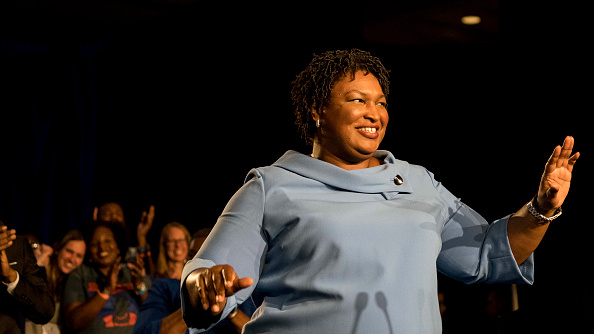 Melina Mara/The Washington Post via Getty Images(ATLANTA) — Stacey Abrams made history Tuesday night by delivering the Democratic response to the State of the Union as the first African-American woman to give the formal response to a president's address.
"Our power and strength as Americans lives in our hard work and our belief in more. My family understood firsthand that while success is not guaranteed, we live in a nation where opportunity is possible. But we do not succeed alone," Abrams said in her address, which she delivered from Atlanta following President Donald Trump’s address in the House Chamber on Capitol Hill.
"In these United States, when times are tough, we can persevere because our friends and neighbors will come for us. Our first responders will come for us," she said.
She slammed the government shutdown as "a stunt, engineered by the president of the United States, one that defied every tenant of fairness and abandoned not just our people, but our values."
"Families' hopes are being crushed by Republican leadership that ignores real life, or, just doesn't understand it," she said.
The selection of Abrams, a Democratic rising star who gained national attention after losing a tight gubernatorial race in Georgia during the 2018 midterms, breaks from the tradition of having an elected member of the House or Senate give the opposition party’s much-watched response.
She also referenced voter suppression which was a controversial touch point in her own gubernatorial race, saying "we can no longer ignore these threats to democracy."
"While I acknowledge the results of the 2018 election here in Georgia, I did not and we cannot accept efforts to undermine our right to vote," Abrams said.
Without specifically referencing the embattled governor of Virginia who is facing calls for his resignation amid a scandal over a racist yearbook photo, Abrams said that "where we falter, we make amends."
"We fought Jim Crow with the civil rights act and the voting rights act. Yet we continue to confront racism from our past and in our present, which is why we must hold everyone from the highest offices to our own families accountable for racist words and deeds and call racism what it is, wrong," she said.
She struck a unifying yet pointed tone in a concluding remark to Trump.
"Even as I am very disappointed by the president's approach to our problems, I still don't want him to fail. But we need him to tell the truth," Abrams said.
While the 2020 election is still 637 days away, John Hudak, a senior fellow at The Brookings Institution said it was likely a factor in the Democrat’s selection process because of the growing number of elected Democrats who have either announced or speculated about a possible presidential run.
Hudak said that if any of the popular elected Democrats who may be wading into the 2020 waters were selected, “the Democratic leadership would look like they’re playing favorites.”
“Stacey Abrams isn’t going to have to worry about internal House politics or internal Senate politics. She can go out and five an inspiring speech that introduces herself to a national audience and lays out a Democratic vision for public policy in the future,” Hudak said.