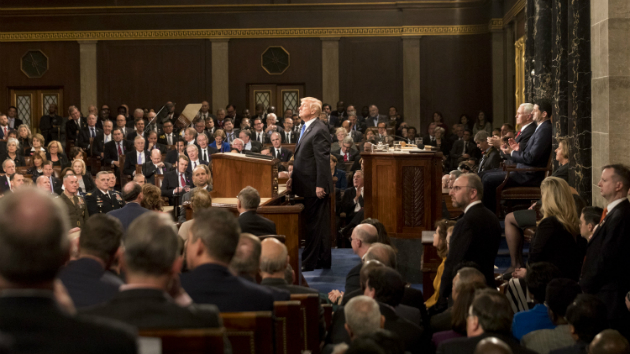 9:33 p.m.: State of the Union fact check: What President Donald Trump is claiming
Our team of journalists from ABC News is fact-checking some of President Donald Trump's statements, looking for additional context, detail and information. Here is ABC News' fact check of the address.
9:27 p.m.: Trump speaks of Alice Johnson, the woman released from jail after pleas from Kim Kardashian
Trump said he heard through “friends” — namely, reality television star Kim Kardashian West — about the story of Alice Johnson, a woman who was in prison for almost 22 years for non-violent drug charges.
Trump commuted her sentence in June and Johnson is in attendance at the speech tonight.
“Alice's story underscores the disparities and unfairness that can exist in criminal sentencing — and the need to remedy this injustice,” Trump said. “When I saw Alice's beautiful family greet her at the prison gates, hugging and kissing and crying and laughing, I knew I did the right thing.
Trump’s bipartisan criminal justice reform act, the First Step Act, was recently signed into law.
9:23 p.m.: Chants of 'USA' from Republicans
"That sounds so good," Trump said, veering off script in reaction to the standing ovation and chants, largely from Republicans, of "U.S.A."
The applause came after Trump's comments about the strength of the country: "After 24 months of rapid progress, our economy is the envy of the world, our military is the most powerful on earth, and America is winning each and every day. Members of Congress: the State of our Union is strong. Our country is vibrant and our economy is thriving like never before."
9:12 p.m.: Trump introduces Buzz Aldrin, says Americans will go back to space
“Half a century later, we are joined by one of the Apollo 11 astronauts who planted that flag: Buzz Aldrin,” the president said as he introduced the astronaut. Aldrin sits near First Lady Melania Trump.
“This year American astronauts will go back to space on American rockets,” Trump said.
The president also introduced WWII veterans Private First Class Joseph Reilly, Staff Sergeant Irving Locker, and Sergeant Herman Zeitchik.
9:10 p.m.: The president’s first major applause line
“Victory is not winning for our party victory is winning for our country,” the president said at the beginning of his speech. He received a standing ovation from members of Congress and Vice President Mike Pence, sitting behind him beside House Speaker Nancy Pelosi.
9:07 p.m.: The speech begins
The State of the Union address has begun. It’s expected to be over an hour long and followed by a response from Democrat Stacey Abrams.

8:56 p.m.: Energy Secretary Rick Perry is the designated survivor
Perry is in an undisclosed location in case of an attack or disaster that would leave top government officials gathered at the Capitol incapacitated.
The pool of choices for the “designated survivor” is smaller this year because of the many vacancies in the administration. Read more here.
8:50 p.m.: Trump arrives
The president has arrived at the Capitol to give his second State of the Union speech.
The Trump family is already seated. Notably, Don Trump Jr.'s girlfriend Kimberly Guilfoyle and Tiffany Trump are both wearing white dresses — the same dress code chosen by many lawmakers in a nod to the women's suffrage movement.
Copyright © 2019, ABC Radio. All rights reserved.