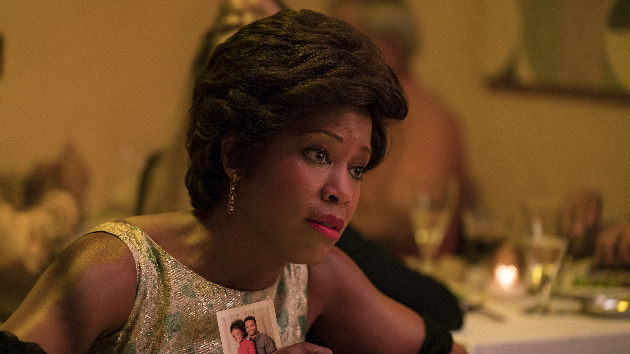 Regina King – Tatum Mangus / Annapurna Pictures (LOS ANGELES) — Every year, ahead of the Academy Awards, that year's crop of new nominees gather for a luncheon that culminates in a star-studded group photo. This year's event took place on Monday, and ABC's Chris Connelly caught up with some of this year's hopefuls.

Melissa McCarthy, nominated for Can You Ever Forgive Me?, brought her mom as her date, and told Connelly that mom had a specific question before she accepted the invitation.

"She's like, 'Well, do we really get lunch?'" McCarthey laughed. "And I said, 'We do. The luncheon will provide a lunch!'" And I was like, "Is…the deal off if they don't give lunch?"
In a career that's spanned more than 50 years, Sam Elliott earned his first-ever Oscar nomination, for his role as Bradley Cooper's character's brother in A Star Is Born. But as Elliott told Connelly, he's always seen his career as a marathon, not a sprint.

"I wanted to do this when I was a young kid and on same level," the laid-back actor drawled. "I felt it was against all odds, it was like a pipe dream, but it was my pipe dream. And, y'know, I was prepared to spend a lifetime pursuing it."
For Emmy and Golden Globe-winner Regina King, her Oscar nomination for If Beale Street Could Talk means giving a hand up to others.

"I hope that it allows me to be in a position to create more opportunities, to be a part of the inclusion happening on a bigger level," she says of her newfound showbiz status as a nominee. "You don't want to receive these accolades and not do what you're supposed to do as a human being."
The 91st annual Academy Awards air February 24 on ABC.