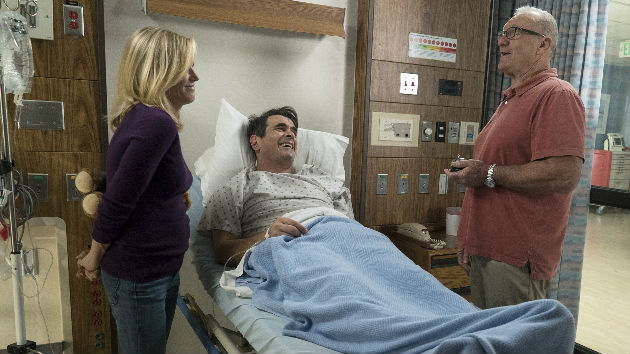 ABC/Richard Cartwright(LOS ANGELES) — ABC announced today that its Emmy Award-winning series Modern Family is coming back — for an 11th and final season.
"For 10 years, our characters have bravely faced turning points in life and moved through them to great personal enrichment; we have chosen a different path by doing one more season of Modern Family," quipped co-creator and executive producer Christopher Lloyd.

The show's other co-creator and executive producer, Steve Levitan, joked, "Even after 10 years together, we realized there are still some things our writers don’t yet know about each other’s sex lives.”

Striking a more serious tone, ABC Entertainment president Karey Burke said of Lloyd and co-creator Steve Levitan, "Chris and Steve have created one of the most seminal and iconic comedies in television history…In its final season, there will be more milestone events that anyone who has been a fan of the series won’t want to miss."

A five-time Emmy winner for Outstanding Comedy Series, Modern Family, which focuses on an extended and blended family, is one of the most awarded comedy series on television.

In addition to Emmys, over the past ten years, its accolades include a Golden Globe win, four SAG Award wins, two GLAAD Media Awards, and a host of others.

Spouses Kristen Bell and Dax Shepard get together for NBC’s ‘Family Game Fight’
After posting “mi vida” family pic, Alec Baldwin goes off on trolls
Lawyer for family of girl injured in pre-Super Bowl crash speaks out: ABC News exclusive
‘The Voice’ returns for its 20th season with Kelly, John, Blake & Nick Jonas, who’s “here to win”
Vivek Murthy to talk about his own family lost to the pandemic in nomination hearing
Family of boy who died in Texas deep freeze files $100M suit against power companies