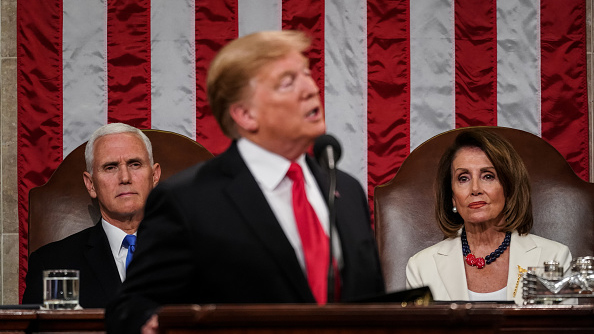 Doug Mills-Pool/Getty Images(WASHINGTON) — Democrats in Congress slammed President Donald Trump on Tuesday for targeting "ridiculous partisan investigations" at the top of his State of the Union speech.
Trump made the comment while commending his administration for the current "economic miracle" taking place in the country, but he singled out the "foolish" investigations as a possible threat.
"An economic miracle is taking place in the United States — and the only thing that can stop it are foolish wars, politics or ridiculous partisan investigations," the president said. "If there is going to be peace and legislation, there cannot be war and investigation. It just doesn't work that way!"
Trump did not mention special counsel Robert Mueller's ongoing probe into Russian interference in the 2016 presidential election, but some Congressional Democrats saw the comment as an attempt to undermine Mueller's probe.
"The President should not be attempting to undermine the Special Counsel's investigation during the #SOTU," Rep. Salud Carbajal, D-Calif., tweeted during the speech. "Mueller's investigation must be allowed to continue without obstruction."
Rep. Steve Cohen (D-TN) made a similar point on Twitter, noting the newly-launched investigations against Trump-related entities this week.
"Not partisan investigations. It’s #Mueller , a Republican, the southern district of New York, Republican, [and eastern] district of Virginia, Republican. #TrumpRussia #TrumpLies," Cohen, chairman of House Judiciary Subcommittee, tweeted.
Prosecutors in New York's Southern District subpoenaed documents from President Donald Trump's inauguration committee earlier this week, sources with knowledge of the matter told ABC News.
Other lawmakers, including Rep. Donald Payne Jr. (D-NJ), and Rep. Lois Frankel (D-Fla), also slammed the president over the comment.
"Protecting the Mueller investigation is a bipartisan issue. We will protect the investigation so truth can come to light," Payne tweeted. "There's nothing ridiculous about investigating crimes, Mr. President. No one, not even you, is above the law. Mueller's investigation must be completed without obstruction. Every American deserves the truth," Frankel added.