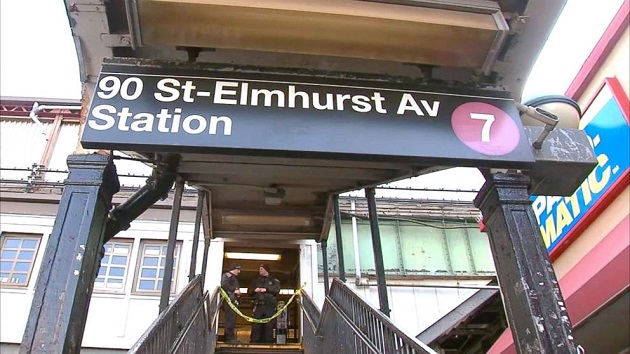 WABC-TV(NEW YORK) — Police have arrested the suspected gunman who fatally shot another man on a subway platform in New York City on Sunday.
The 26-year-old suspect is a known MS-13 gang member who was allegedly involved in another gang-related incident, New York Police Department Chief of Detectives Dermot Shea told reporters at a news conference Monday.
A second suspect, also 26, was arrested and charged with second-degree murder, assault and criminal possession of a weapon, the NYPD confirmed Tuesday morning.
The confrontation began on a moving No. 7 train as it approached the station at 90th Street and Elmhurst Avenue in Queens on Sunday afternoon, Shea said. At least two individuals — possibly more — engaged the victim in a physical fight that spilled onto the platform as the train pulled into the station, Shea said.
When police responded to the subway station around 12:30 p.m., they found an unresponsive male on the platform with a gunshot wound to the head, the NYPD said in a statement.
The victim, identified as 20-year-old Abel Mosso, was shot five to six times, Shea said. Mosso, a known member of the 18th Street gang, was shot multiple times in the face, which led to his death, Shea added. It is unclear if he and the suspects knew each other prior to the encounter.
It's also unclear what sparked the initial confrontation, Shea said.
Video circulating on social media showed two men beating up the victim on the subway platform as witnesses screamed in the background and others tried to intervene.
A man wearing a multi-colored scarf is then seen holding what appears to be a firearm in his right hand. The victim gets up and tries to run away.
The crowded train was full of "hard-working people trying to go through their lives," Shea said. The suspect was arrested just hours after the incriminating video was posted to social media, he added.
"To have the shooter in custody in less than 24 hours, I think, is damn impressive,” Shea added.
Simon Lee, an owner of a nearby business, told ABC New York station WABC-TV that people rushed into his store for safety after the shooting.
"We just heard gunshots and then people rushed downstairs, and then even one girl was crying, and I guess she saw it, rushing into my store and ran into the back," Lee said.
New York City and the borough of Queens in particular has been plagued with "a number" of incidents involving MS-13 in recent months, Shea said.
Copyright © 2019, ABC Radio. All rights reserved.