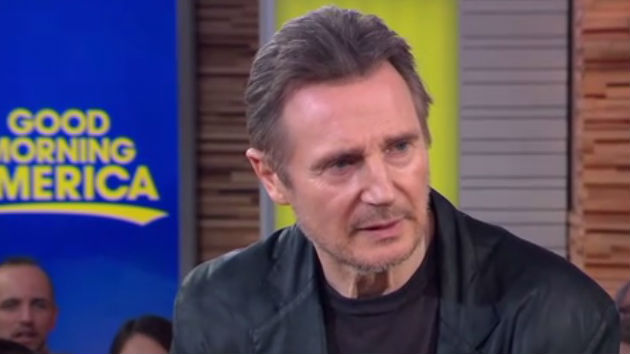 ABC(NEW YORK) — Liam Neeson has come under fire after he revealed in an interview with British paper The Independent earlier this week that he wanted to "unleash physical violence" against black men after a close friend revealed she had been brutally raped by one decades ago.

Neeson's revelation was part of an interview about his new movie, Cold Pursuit. He admitted in the Independent interview, which went viral Monday, that his reaction to his friend's rape was just "awful" — he claimed he would walk down the street with a club, hoping someone would approach him and start an altercation.
"I'm not a racist," Neeson told Good Morning America's Robin Roberts on Tuesday, but he admitted to feeling a "primal urge to lash out" after learning about the decades-old incident.
"I went out deliberately into black areas in the city, looking to be set upon," he said. "It shocked me and it hurt me…I did seek help, I went to a priest." He also said he power-walked two hours every day.
"Luckily, no violence occurred, thanks be to God" he said, admitting he likely would have attacked and possibly killed a man if confronted.
Neeson insisted, however, that if his friend has said her attacker had been white, or Scottish, or any other ethnicity, he would have searched for someone who fit that description.
But he told Roberts that the lesson he wants people to take away from the controversial statements is that he learned, "Violence begets violence. Bigotry begets bigotry."

As for why he even mentioned his feelings in the first place, Neeson explained, "To open up, to talk about these things. We all pretend we're all politically correct…but you sometimes scratch the surface and you discover this racism and bigotry, and it's there."