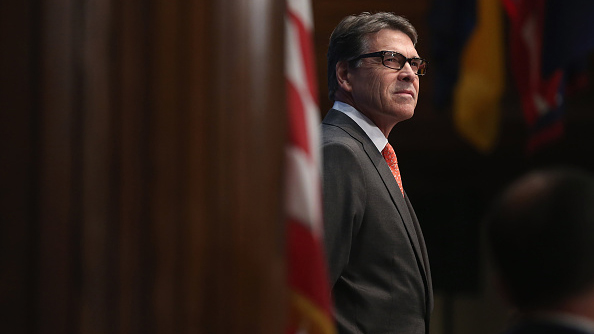 Chip Somodevilla/Getty Images(WASHINGTON) — Energy Secretary Rick Perry was tapped as this year's designated successor, known colloquially as the "designated survivor," in case an attack or disaster leaves top government officials gathered at the Capitol for the State of the Union incapacitated.
Of the 15 possible choices, only nine were eligible to play the role.
Last year, the responsibility fell to Agriculture Secretary Sonny Perdue, who, like others before him, spent the evening in a secret, secure and remote location.
But this year, the pool of eligible survivors from the president's cabinet was a bit shorter than usual due to multiple vacancies in the president’s cabinet.
The Presidential Succession Act specifies that only Senate-confirmed secretaries are eligible for the role, meaning that “acting” secretaries are not. The individual must also be a natural-born U.S. citizen.
Of the 15 executive department heads specified under the law as being eligible, three are currently headed by acting leadership, and another is constitutionally ineligible.
The Pentagon has been operating under temporary leadership since Jim Mattis resigned in December over a disagreement with the president’s decision to withdraw troops from Syria.
Patrick Shanahan currently serves in the role of acting Defense Secretary.
At the Department of Justice, Matthew Whitaker is serving in an acting capacity as attorney general, while the president’s nominee William Barr awaits a Senate confirmation vote.
David Bernhardt has been serving as the acting Secretary of the Interior following Ryan Zinke’s departure at the end of last year amid multiple ethics inquiries. On Monday, President Trump nominated Bernhardt to officially assume the role, subject to Senate confirmation.
Transportation Secretary Elaine Chao is also not able to fill the role because she was not born in the U.S., making her constitutionally ineligible.