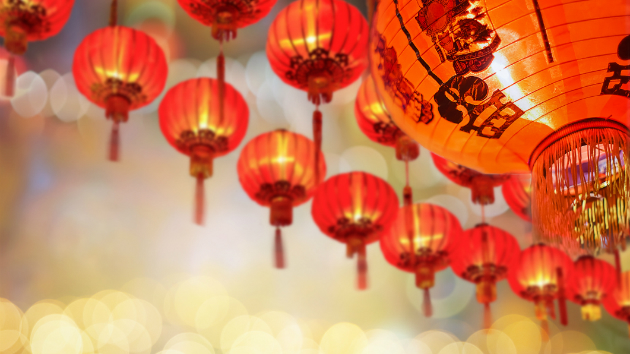 Toa55/iStock(SHANGHAI) — The biggest holiday of the year has begun in China.
Starting Tuesday, relatives will reunite, red envelopes filled with money will be exchanged and massive feasts will be planned to celebrate the Lunar New Year.
Millions of people are hitting the roads, rails and skies to return home as part of the world's largest annual mass migration of humans.
Here’s what you need to know about the festivities:
What is Lunar New Year?
Lunar New Year celebrations occur across Asian cultures based on different dates, according to the local lunisolar calendars.
China's Lunar New Year celebration is also referred to as the Spring Festival. Celebrations take place for 15 days.
At the stroke of midnight, families set off firecrackers and fireworks to ring in the new year. Traditionally the fireworks were meant to chase away a mythical beast called Nian, which is believed to be the embodiment of bad luck. Traditional lion dances performed throughout China and the ethnic Chinese diaspora communities also serve the same purpose in driving the Nian monster away.
Traditional customs include decorating one's home with red paper cuttings, couplets (vertical banners featuring two lines of poetry), lanterns and scrolls.
What is the animal zodiac this year?
It’s the "Year of the Pig."
Past years of the pig include 1935, 1947, 1959, 1971, 1983, 1995 and 2007.
Pig-shaped toys and movies are on high demand, according to some reports.
The pig is the last animal in the Chinese zodiac and despite its slovenly reputation in the West, in the agrarian days of China the pig was seen and treated as a symbol of wealth. Their chubby faces and large ears are seen as signs of luck. Those born in the year of pig are described as hard-working, social, friendly and realistic.

Arnold Schwarzenegger, Hillary Clinton and Ronald Reagan were all born in the year of the pig.
Why are so many people on the move?
Hundreds of millions of rural migrant laborers are the backbone of China’s economic miracle and many live and work in China’s ever-expanding urban areas.
Chinese traditionally travel home for the holiday — one of the biggest human migrations on the planet.
The government said it expects almost three billion trips this year, with the majority of them to be made by road and 413 million by rail, according to official media.
Chinese residents travel as part of what is known as "chunyun," or the Spring Festival travel rush, which covers 40 days between Jan. 21 and Mar. 1. Woodworker Wu Xiaoxin will travel 26 hours by train to his home in Fuxin, in the northeast Liaoning Province, for the holiday.
Having worked alone in Shanghai for 10 years, Wu told ABC News he was used to the long and exhausting commutes to see his wife and child.
"Of course I’m happy (to go home) and tired at the same time," Wu said. "It’s a custom in China. I can only dream about getting home in a wink."
Copyright © 2019, ABC Radio. All rights reserved.

Here’s what happened on the ‘Legally Blonde’ 20 year reunion special
Puerto Rican vote becomes essential as early voting begins in Florida
Election 2020: Why voting in the coronavirus pandemic will be unlike any other year
Florida begins in-person voting with over two million votes already cast by mail
Coronavirus live updates: China to test city of 9 million amid outbreak linked to hospital
Trump begins his return to the campaign trail in a critical Florida region