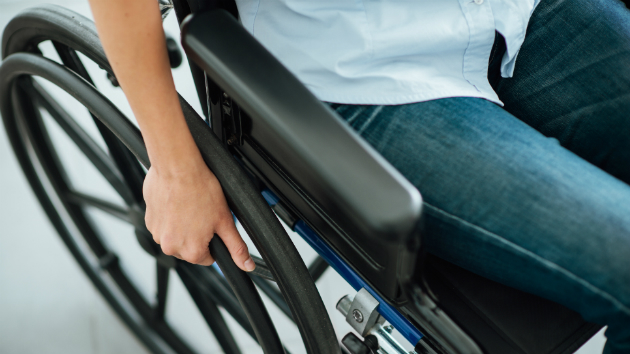 demaerre/iStock(NEW YORK) — There was a time when 33-year-old Keisha Greaves hid her muscular dystrophy. Now, she embraces her condition with her inspirational clothing line, Girls Chronically Rock.
In 2010, Greaves, who had a bachelor's degree in fashion design and merchandising and was studying for her masters at Framingham State University in Cambridge, Massachusetts, started noticing that she was no longer able to complete certain physical movements, such as raising her right arm.
"I would just repeatedly fall to the floor out of nowhere, and I had no idea where it was coming from," Greaves told ABC News' Good Morning America. "I thought something isn't right."
She was diagnosed with limb-girdle muscular dystrophy (LGMD), which weakens arm and leg muscles.
Even after Greaves visited a neurologist for testing, she said she still felt in denial about her condition.
"Even just going on job interviews at this time, or just going out with friends, I totally wouldn't even tell them about my muscular dystrophy," she said. "I would say I just sprained my ankle or I was in a car accident instead of just saying I had muscular dystrophy."
It wasn't until a few years later when Greaves decided to use her "passion for fashion" as a way to look at her disease in a new light.
"I said, 'Hey, why don't I start a T-shirt line,' because I love wearing things that are comfortable, I love wearing T-shirts, so I wanted something with the word 'chronic' in it to incorporate for chronic illnesses," she shared.
Greaves launched her line Girls Chronically Rock, which now includes T-shirts, bracelets, hoodies and clothing with different sayings, such as "Trust in Your Dopeness."
"For me [Trust in Your Dopeness] means trust and believe in yourself," Greaves said. "If you want to do something, you can do it."
The designer said she wants Girls Chronically Rock to be more than a clothing brand — she wants it to be a movement.
"Clients have reacted totally awesome to Girls Chronically Rock," she said. "I love getting inspirational letters or direct messages on Instagram from people I don’t know."
Greaves has received messages from people with loved ones struggling with muscular dystrophy and other illnesses such as fibromyalgia.
"We can all relate in some kind of way and that's what Girls Chronically Rock stands for," she shared.
In addition to her fashion line, Greaves serves as the Massachusetts Muscular Dystrophy Association (MDA) Ambassador in Boston, where she shares her story at various speaking engagements and speakers with different medical professionals about muscular dystrophy.
One of her future goals is to expand her work to include adaptive clothing for people with disabilities.
"I have no control over this muscular dystrophy. This has control over me and that is something that I have accepted over some time. I just turn to things that make me feel happy," she said.
"Girls Chronically Rock honestly makes me feel good and happy every day," she added.

Democrats’ unemployment insurance plan passes on party line vote
Meet Kathy Hochul, the woman who could succeed Cuomo if he leaves office
Gov. Cuomo faces calls to resign from lawmakers after third woman comes forward
No big gatherings for Saint Patrick’s Day in Boston: ‘We are so close to a finish line’
Thinx’s new underwear line coming to Target and CVS
Third woman comes forward with harassment allegations against Cuomo