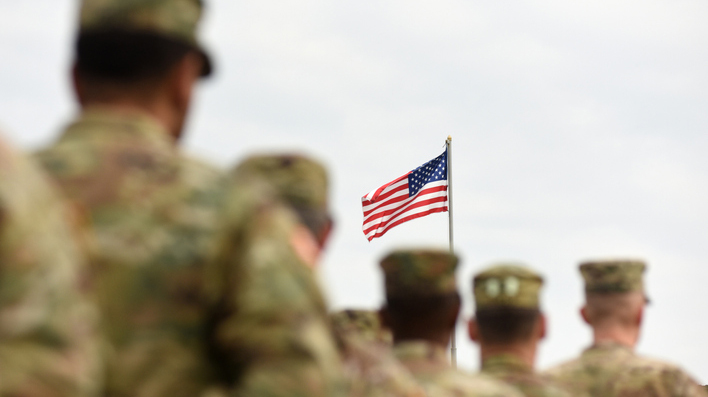 Bumblee_Dee/iStock(WASHINGTON) — A Pentagon report released on Monday indicated that the Islamic State remains an active insurgent group in Iraq and Syria and that, without sustained pressure, the group could reconstitute in Syria within six to 12 months.
The report comes just one day after President Donald Trump said in an interview with CBS News' "Face the Nation," that the U.S. would send troops back to Syria if needed, even as the administration continues its plan to withdraw 2,000 U.S. forces from Syria.
"We have very fast airplanes, we have very good cargo planes. We can come back very quickly, and I'm not leaving," he said.
In the same interview, the president also said the purpose of the U.S. military presence in Iraq includes "watching" Iran — a comment that drew consternation from Iraqi leadership.
"ISIS remains an active insurgent group in both Iraq and Syria," U.S. Central Command (CENTCOM) told the Pentagon's Office of Inspector General.
The remarks were included in its quarterly report to Congress.
"Currently, ISIS is regenerating key functions and capabilities more quickly in Iraq than in Syria, but absent sustained [counterterrorism] pressure, ISIS could likely resurge in Syria within six to twelve months and regain limited territory in the [Middle Euphrates River Valley (MERV)]," CENTCOM added.
CENTCOM's response to the Inspector General's office came on Jan. 16, 2019 nearly a month after Trump’s surprise announcement that he was ordering the withdrawal of U.S. troops from Syria after the U.S. "won against ISIS," he said.
Trump’s announcement in December came after the Inspector General had completed much of its work, but it led the office to pose a new series of questions about the withdrawal to military commands.
U.S. troops are currently supporting the Syrian Democratic Forces in their final battle against the last ISIS strongholds in eastern Syria, where it's estimated that about 2,000 ISIS fighters remain. According to the Pentagon report, those remaining fighters are “battle-experienced,” “hardened,” and “well-disciplined.”
As part of its withdrawal plan, the U.S. has sought for all Iranian-commanded forces to exit Syria.
Trump also told CBS News on Sunday that, while 99 percent of the terrorist group's self-declared caliphate has been reclaimed, "we will be announcing in the not too distant future 100 percent."
The president acknowledged in the Sunday interview that there will still be "pockets" of fighters, but said, "You're not going to keep armies there because you have a few people or you even have fairly reasonable numbers of people. We've been there for many, many years."
He also said that some of the U.S. troops withdrawing from Syria will be based at al-Asad air base in western Iraq, which the president visited briefly in December. He said they would be tasked with "looking a little bit at Iran because Iran is a real problem."
Trump denied wanting to strike Iran, but said, "I want to be able to watch Iran. All I want to do is be able to watch. We have an unbelievable and expensive military base built in Iraq. It's perfectly situated for looking at all over different parts of the troubled Middle East rather than pulling up … and if there's trouble, if somebody is looking to do nuclear weapons or other things, we're going to know it before they do."
The policy of "watching" Iran from inside Iraq came as a surprise and outrage to Iraqi leaders.
Iraqi President Barham Salih told a forum in Baghdad on Monday that the U.S. president had not asked for permission to use its base for such purposes.
“Don’t overburden Iraq with your own issues,” Salih said. “The U.S. is a major power … but do not pursue your own policy priorities, we live here.”
“It is of fundamental interest for Iraq to have good relations with Iran” and other neighboring countries, he added.
Iraq's former Prime Minister Haider al-Abadi, who had strong backing from the U.S, also voiced opposition to Trump's comments, tweeting, "Iraqi sovereignty must be respected."
"Its interests should not be compromised," the prime minister from 2014 to 2018 wrote. "Iraq should not be used as a spring board to attack its neighbours. We are not proxies in conflicts outside the interests of our nation."
There is already concern that Trump's comments will encourage some Iraqi politicians, especially those with close ties to Iran, to push more strongly for the approximately 5,200 U.S. troops to leave Iraq.
A senior State Department official said on Monday that the U.S. presence in Iraq is at the invitation of the Iraqi government "for the enduring defeat of ISIS" and "that hasn't changed."
But the official stressed that Iran's "malign" activity throughout the region is of concern to Washington, and said its action "allows the conditions for ISIS to fester" and called on Iran to respect Iraq's sovereignty.