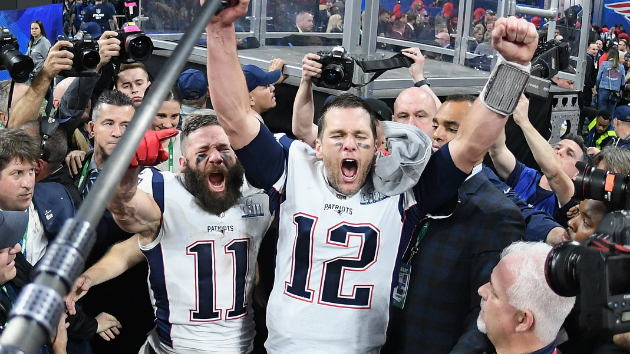 Harry How/Getty Images(ATLANTA) — After quarterback Tom Brady led a drive to win the New England Patriots their record-tying sixth Super Bowl, he summed up the 13-3 victory Sunday over the Los Angeles Rams. Only the Pittsburgh Steelers have won as many Super Bowls, while Brady now has the most Super Bowl wins of any quarterback in NFL history.
"Finally got a touchdown and the defense played the best game of the year," Brady said. "How about our defense? How about our defense? They played unbelievable."
So well that outside linebacker Dont'a Hightower joked they had extra incentive.
"I'm tired of hearing about Brady," he said with a laugh. "I won one today — we all got one. It feels good for us to get it all. Shout out to him getting his, but this is a team game and it feels good to win."
No Super Bowl had gone into the fourth quarter without a touchdown. This one did, tied 3-3 — even though these teams had combined to average over 60 points a game.
When the Patriots needed a score, Brady — the oldest winning quarterback in a Super Bowl, at 41 — completed four straight passes, including a pair covering 47 yards to tight end Rob Gronkowski. The second, on which the star tight end beat two defenders, ended at the Los Angeles two yard line, the only time either team was inside the 20-yard line.
Julian Edelman, the outstanding receiver who missed the 2017 season with a knee injury, was the game's MVP with 10 receptions for 141 yards.
At 66, Bill Belichick became the oldest coach to win a Super Bowl, and ties legends George Halas and Curly Lambeau for the most Super Bowl wins by a coach.
Rams coach Sean McVay, the youngest Super Bowl head coach at 33, admitted he was outcoached. He had no answers as Todd Gurley, coming off knee issues, managed 35 yards rushing, quarterback Jared Goff went 19 for 38 for 229 yards and was sacked four times. Brandin Cooks, a Patriots receiver last season, did have eight receptions for 120 yards.
Copyright © 2019, ABC Radio. All rights reserved.