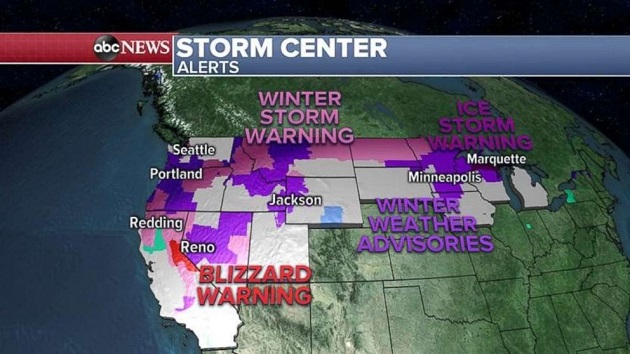 ABC News(NEW YORK) — Parts of Los Angeles saw half a foot of rain over the weekend as strong West Coast storms created mudslides, flash floods and knocked down trees.
The Sierra Nevada Mountains saw about 96 inches of snow, including 72 inches in just 24 hours.
On Monday morning, a new and much colder storm system is moving into the West. Places that don't normally get snow, including Seattle and Portland, may see some. Mountains near L.A. and San Diego may see a bit more snow Monday night as well.
These western storms are expected to continue marching east, delivering snow and ice to the upper Midwest and Great Lakes region.
By Tuesday morning, the heaviest precipitation is likely to move inland from the West Coast to the Rockies, but rain will linger along the coast and snow could still fall at higher elevations.
Desert areas including Las Vegas and Phoenix should see some rain.
A much drier Wednesday should be in store for the West.
Meanwhile, in much of the East and South, it'll feel like springtime.
Highs this week near New York City and Washington will be near 60 degrees, while Dallas and Atlanta are expecting temps in the 70s and 80s.
Copyright © 2019, ABC Radio. All rights reserved.