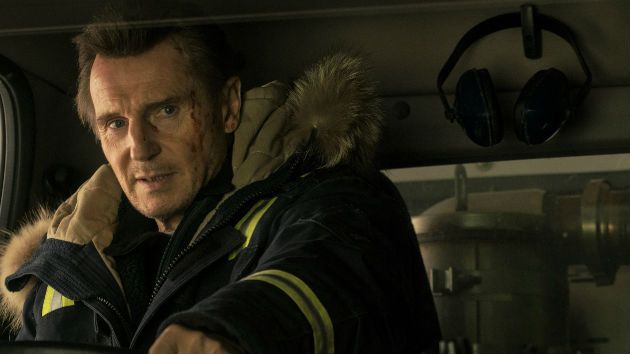 Summit Entertainment/Doane Gregory(LONDON) — In his new movie Cold Pursuit, Liam Neeson plays an everyman who has vengeance on his mind after his son is killed in a gang-related incident.

But in an interview about the project with The Independent, Neeson confesses that his character's mindset is something that he's personally experienced. According to the actor, he once harbored a "horrible" racist revenge fantasy after a loved one was raped by a black person.

"I’ll tell you a story. This is true," the actor recalled, before revealing that the unidentified woman was attacked while Neeson was overseas.

"She handled the situation of the rape in the most extraordinary way…I asked, did she know who it was? No. What color were they? She said it was a black person," he recalled.

Neeson continued, "I went up and down areas with [a makeshift club], hoping I’d be approached by somebody — I’m ashamed to say that — and I did it for maybe a week, hoping some 'black b*****d' would come out of a pub and have a go at me about something, you know? So that I could…kill him."
The Taken star admitted, "It took me a week, maybe a week and a half, to go through that."

As far as the victim's response to his behavior, he said, "She would say, 'Where are you going?' and I would say, 'I'm just going out for a walk.' You know? 'What’s wrong?' 'No no, nothing's wrong.'"
The actor says, "It was horrible, horrible, when I think back, that I did that. And I’ve never admitted that, and I’m saying it to a journalist. God forbid."
The actor admitted, "It’s awful…But I did learn a lesson from it, when I eventually thought, 'What the f*** are you doing,' you know?"
Neeson's camp wouldn't respond to a subsequent follow-up to the stunning confession, the paper explained.

‘COVID’s so wicked’: Families confront losing multiple loved ones
Megxit, stage left: Poll says majority of Brits don’t want to watch Oprah’s interview with Harry and Meghan
Jameela Jamil says she grappled with suicidal thoughts last year
Mandy Moore says she was shut out of an interview because she refused to talk about her abuser
‘To All the Boys I’ve Loved Before’ star Noah Centineo says he’s done playing teenagers
Georgia bill seeks to reunite families with loved ones in nursing homes, hospitals during pandemic