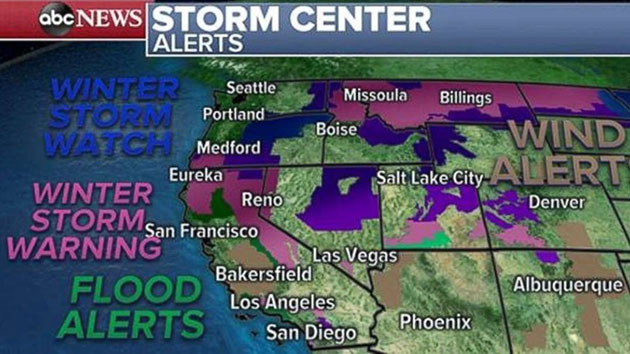 ABC News(NEW YORK) — More rain is on the way for the West Coast after weekend storms caused flash flooding and mudslides in Southern California, wiping out roadways.

The large storm brought heavy rain, high winds and very heavy mountain snow to California on Saturday. A series of storms is set to bring further impacts to the region over the next few days.

Multiple systems will bring more rounds of unsettled weather to the western U.S. through Tuesday.

Winter storm warnings, watches and advisories, as well as flood and wind alerts, are in effect for much of the western U.S. through the next few days.

Another system will slide south and east toward California on Sunday and bring multiple rounds of rain to the California coastline. However, rain will become more widespread by Monday as the storm comes ashore and heavy rain will fall once again in Southern California.

About 1 to 2 inches more rain will fall along the Southern California coastline through Tuesday, with the majority of that coming in Monday’s storm. Locally, 7 to 10 feet of snow accumulation is expected in the Sierra Nevada Mountains. Snow will also move into the southern Cascades and northern Rockies, with 1 to 2 feet of fresh snow expected locally.

Even though the additional rain won't be as heavy as Saturday, the precipitation in Southern California is saturated, and additional flash flooding, mudslides and debris flow will be expected over the next couple of days.

The rainy weather on Saturday caused flooding in Malibu, where an excavator was rescued after a sinkhole that developed on Yerba Buena Road swallowed the heavy machinery, making the street impassable north of Yellow Hill, according to ABC Los Angeles Station KABC-TV.

Flooding also occurred on the Los Angeles River in Glendale, with raging waters flowing down the Pacific Coast Highway, as did damaging winds, with gusts of up to 76 mph measured at Point Conception.

Members of the San Bernandino County Sheriff's Office had to rescue an elderly man trapped in his car as water rushed around him in the Yucca Valley, video posted to the sheriff's office Instagram shows. The man was experiencing hypothermia but was otherwise OK, authorities said.

At Mammoth Mountain, nearly 18 inches of fresh snow fell, and a possible tornado was reported in Acton.

Farther north, colder air and snow will be moving into the Northwest as well. There is a possibility of some lowland snow in Seattle from Sunday night into Monday morning. Even though accumulations will be light, it could make for a problematic morning commute. That storm will also move inland on Monday, however, it is expected to be less intense than the previous two storms.

A major warm up is underway in the Midwest after the region dealt with a brutal cold blast early this week. Lone Rock, Wisconsin, which was minus 39 on Thursday, reached 41 degrees on Saturday. That is an 80-degree warm up in 57 hours.

Some of this mild air will slide east on Monday, with another mild day from Oklahoma City to Detroit. Chicago will start the day in the 40s, but the passing of a cold front will bring the temperature back down into the 30s, which is seasonable for this time of the year.

When the milder air reaches the East Coast it will be accompanied by a mix of clouds and sun for the major Northeast cities. The latest forecast guidance shows temperatures will be approaching the 60s by Tuesday, with sun and clouds from Washington, D.C., to Boston.

The combination of sunshine and temperatures nearly 20 degrees above average is relatively atypical in this region of the country in February. Additionally, it will likely be the nicest and most comfortable weather this region has seen in months.