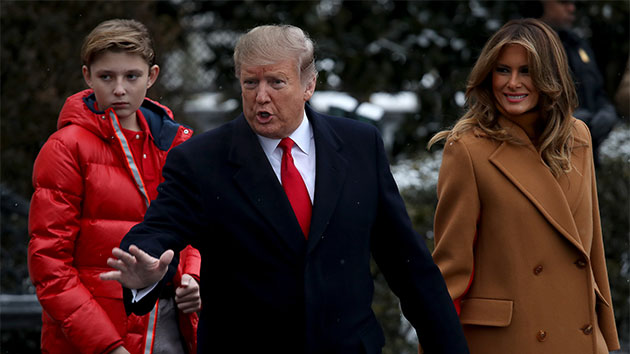 Win McNamee/Getty Images(WASHINGTON) — Like millions of Americans this Sunday, President Donald Trump will be joined by family and friends to watch the New England Patriots and the Los Angeles Rams face off in the Super Bowl.

But in an interview that aired on football’s biggest day, Trump, a self-proclaimed fan said he would have a “hard time” letting his own son play the game and called it a “dangerous sport.”

CBS News' Margaret Brennan asked the president if he would let his 12-year-old pick up the game.

"If he wanted to? Yes. Would I steer him that way? No, I wouldn't," the president said.

Football has faced a backlash — and a decline in youth participation — amid concerns about long term brain damage and physical injury. The NFL has tried to make changes to the sport to address the issues, but the president said that "hasn't solved the problem."

"I hate to say it because I love to watch football. I think the NFL is a great product, but I really think that as far as my son – well, I've heard NFL players saying they wouldn't let their sons play football. So, it's not totally unique, but I — I would have a hard time with it," Trump said.

In the past, the president has complained about the NFL’s changes to the game in an effort to prevent serious injury.

The president has had at times a strained relationship with the NFL, and railed against players like Colin Kaepernick for taking a knee during the national anthem in protest of police brutality against black people and people of color.

But the president told CBS on Sunday that he understands why some players would take that position, and said members of the NFL have reached out to applaud him for his administration’s efforts on criminal justice reform.

“They have been calling and thanking, you know, that people have been trying to get that taken care of and it's now signed into law and affects tremendous numbers of people, and very good people,” Trump said. “I think that when you want to protest I think that's great. But I don't think you do it at the sake of our flag, at the sake of our national anthem.”

Trump signed the First Step Act in December which, among other things, aims to reduce recidivism rates among federal prisoners, and allows judges to hand down sentences below the mandatory minimum for certain offenders.

The president will tune in to the Super Bowl at his private golf club in West Palm Beach and plans to enjoy a special performance from the Florida Atlantic University marching band. Trump says his Super Bowl party has grown in size every year.

"Now I end up with about 700 people for a Super Bowl. And believe it or not, there are a lot of friends," he said.

The president told CBS he would be cheering for the Patriots.

"Well, they have a very special owner and coach, and certainly they have, I guess, the greatest quarterback of all time. So I would say they would win. As the expression goes, who knows? I hope it's a great game," Trump said.

"Not all the games are great. But I do tend to leave a little bit early, and I think I probably will in this case, too, because it's good to get up in the air so we don't affect the flights back to Washington and other places," he said.

This is the president’s third time spending Super Bowl Sunday away from Washington at his private Florida estate, Mar-a-Lago, which he calls the “Winter White House.” It is also the president’s first time back in Florida after he chose to remain in Washington during the record 35-day partial government shutdown.

Trump spent the weekend in Florida playing golf and spending time at Mar-a-Lago. On Saturday the he played golf with greats Jack Nicklaus and Tiger Woods.