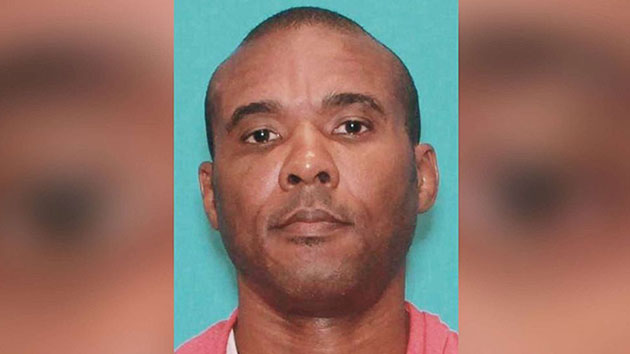 Montgomery County Sheriff's Office(CONROE, Texas) — Texas authorities are searching for a professional fighter suspected of murder after he escaped a jail transport van on Sunday.

Marks was arrested by U.S. Marshalls in Grand Rapids, Michigan, on a charge of burglary with the intent to commit another felony, Conroe Police Lt. Dorcy McGinnis said in a press conference Sunday afternoon. He was being extradited back to Bell County by Texas Prisoner Transport Services, McGinnis said.

Marks fled on foot after the van stopped at a McDonald's in Conroe Sunday around 7 a.m., McGinnis said. Nine other inmates were in the van at the time, and the van — which had two transport guards — had recently stopped in Louisiana on its way to Texas, she added.

Marks, who fights under the nickname "Spiderman," according to mixed martial arts website Sherdog, is 44 years old, stands 5-foot-11-inches tall, and weighs 185 pounds.

Marks has warrants for his arrest in Temple, Texas, for the deaths of Jenna Scott, 28, and Michael Swearingin, 32, McGinnis said. They were reported missing on Jan. 9 and their bodies were found in Oklahoma on Jan. 15, according to the Temple Police Department.

Scott was Marks' ex-girlfriend, and the burglary charge he was picked up on was related to her, ABC Killeen affiliate KXXV-TV reported.

Scott had filed a protective order against Marks in Bell County on July 27, court documents show. They began dating in August 2015 after meeting on Tinder, according to the order.

In a sworn affidavit filed on July 30, Scott described Marks as a "master manipulator" and said she "became aware of his manipulative and deceitful nature" as their relationship progressed, the court document shows.

"I believe he is a pathological liar," Scott said, according to the court document. "I also believe he is a psychopath. He told about me killing pets when he was a child in Oklahoma and that he was in and out of psychiatric facilities during his childhood. He told me he had killed someone in Oklahoma but that he was able to cover it up and that he could do the same here in Texas."

Marks would threaten Scott every time she tried to break up with him and even choked her until she lost consciousness on two occasions, she said in the affidavit.

"Each time he allowed me to regain consciousness and then he choked me out again," she said, according to the court document.

Marks allegedly broke into Scott's home and threatened her on Aug. 21, KXXV reported, citing an arrest affidavit. After the incident, Scott told police she hadn't given Marks consent to be inside her home and that he took her phone out of her hand and threw it, according to the station.

When Scott yelled for her daughter to call 911, Marks then instructed Scott to make her daughter hang up the phone, KXXV reported.

Marks allegedly said, "You know what I am capable of … your entire family and all your friends will need witness protection if you call the police," KXXV reported, citing the arrest affidavit.

Two other members of Scott's family were also listed in the protective order, the document shows.

Marks is considered to be "extremely dangerous." Authorities do not believe he is in any kind of restraints, McGinnis said, warning residents to stay indoors and not to make contact with him.

Marks may not be wearing a shirt, the sheriff's office said, adding that deputies found his shirt after he fled.

Biden calls Texas decision to reopen ‘Neanderthal thinking’
Texas, Mississippi to end mask mandates, allow businesses to reopen at full capacity
Fallout from Texas energy crisis that left millions in the dark continues
Texas governor to end mask mandate, allow businesses reopen at full capacity
Judge returns to bench after son’s murder: ‘I will not be frightened or be afraid to do what I love to do’
Missouri father, two young children found dead days after disappearance, authorities say