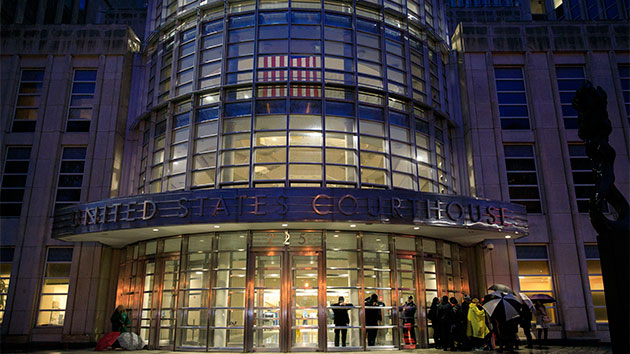 Prosecutors have accused Guzman of trafficking cocaine, heroin, methamphetamine and marijuana into the U.S. as an alleged top leader of the Sinaloa Cartel.

“This guy I think is the number one bad guy of our generation and I just don't think people realize,” said Jack Riley, retired deputy administrator for the Drug Enforcement Administration.

Closing arguments ended Thursday, and the trial did not sit on Friday. The judge will give the jury instructions on Monday morning.

In 10 weeks of testimony, 53 prosecution witnesses have seemingly described every conceivable aspect of the life of the alleged former head of the Sinaloa cartel: a naked journey through a secret tunnel, plastic bananas filled with cocaine, brutal murders, spied-on mistresses and an alleged bribe to then-Mexican President Pena Nieto.

“Obviously we disagree with much of the allegations against Mr. Guzman,” defense attorney Jeffrey Lichtman said outside court.

The defense asserted in closing arguments that Guzman was the victim of an elaborate conspiracy.

Defending Guzman was never going to be easy after he bragged about being the world's biggest drug trafficker in an interview with Sean Penn for Rolling Stone.

Guzman, 61, was extradited to the U.S. on the eve of President Donald Trump's inauguration in January 2017.

“Guzman's destructive and murderous rise as an international narcotics trafficker is akin to that of a small, cancerous tumor that metastasized and grew into a full blown scourge that for decades littered the streets of Mexico with the casualties of violent drug wars,” Robert Capers, then-U.S. Attorney for the Eastern District of New York, said at the time of Guzman's extradition. The Eastern District is prosecuting Guzman’s case.

Jurors have been asked to weigh ten counts against Guzman, each with different components.

“They have to systematically go through each count in the indictment in their verdict sheet,” Sprio said. “Their decision can come quite quickly inside the jury room but it may take them time to work through all the charges.”