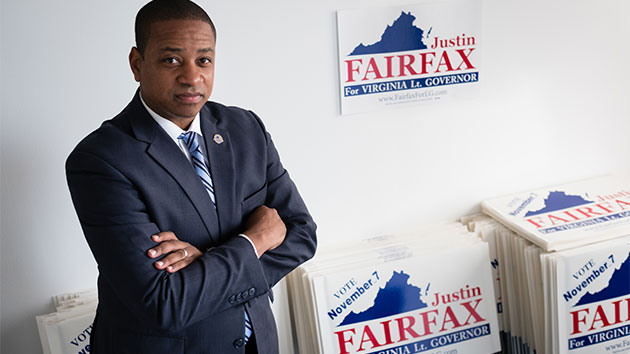 Sarah L. Voisin/The Washington Post via Getty Images(WASHINGTON) — As calls grow louder for Virginia Gov. Ralph Northam to resign over racist photos on his medical school yearbook page, waiting in the wings to succeed him if need be is Lt. Gov. Justin Fairfax, a descendant of slaves who has protested the state's honoring of Confederate leaders.

Fairfax, 39, an Ivy League-educated lawyer and former federal prosecutor, was elected Lieutenant Governor in 2017, becoming the first African-American in nearly 30 years to win a statewide office.

If Northam, a white Democrat, does decide to step down, Fairfax will become only the second African-American since Doug Wilder to serve as governor in Virginia. Wilder was governor of the state from 1990 to 1994.

On Friday, a photo of a man wearing blackface and posing next to someone in a Ku Klux Klan garb surfaced in a 1984 yearbook from Eastern Virginia Medical School under a page emblazoned with the name "Ralph Shearer Northam" at the top and including other pictures of the future governor.

By Friday evening, Northam apologized and confirmed he was one of the two men in the racist photo on his page. But on Saturday, the governor retracted his statement, saying he was actually neither man in the photo.

Northam also compounded his problems by revealing that in the 1980s he participated in a dance contest dressed as Michael Jackson and even wore black shoe polish on his face and learned to "moonwalk" like the late King of Pop.

Northam, 59, a physician, has so far rejected calls from Democratic leaders, including former Vice President Joe Biden, to resign.

In a statement about the controversy, Fairfax said he was "shocked and saddened by the images" on Northam's yearbook page.

"They are an example of a painful scourge that continues to haunt us today and holds us back from the progress we need to make," Fairfax said in his statement.

He said Northam reached out to him personally on Friday to apologize. Fairfax has yet to join the chorus calling for Northam's resignation.

"As we commemorate 400 years since the first enslaved Africans were brought to Virginia, it is painful to experience such a searing reminder of the modern legacy of our nation's original sin," Fairfax said. "And, as someone whose great-great-great grandfather was enslaved in Virginia, this episode strikes particularly close to home."

The firestorm erupted just two weeks after Fairfax walked out of the state Senate in protest over a tribute to Gen. Robert E. Lee marking the Confederate leader's 212th birthday.

"It does not move us forward, it does not bring us together. And so I wanted to do my part to make it clear that I don't condone it," Fairfax told the Washington Post of his decision to protest the commemoration of Lee.

Fairfax, a married father of two young children, grew up in Washington, D.C., and attended Duke University on a scholarship. He graduated in 2000 with a degree in public policy, according to his bio on the Lieutenant Governor's website.

After graduating from college, Fairfax worked on Al Gore's presidential campaign before enrolling at Columbia University School of Law, where he worked on the school's law review and graduated in 2005.

Upon receiving his law degree, Fairfax served as a law clerk to Judge Gerald Bruce Lee of the U.S. District Court for the Eastern District of Virginia.

He later landed a position as a federal prosecutor in Alexandria, Virginia, serving a deputy coordinator of the Northern Virginia Human Trafficking Task Force, according to his bio.

He first ran for political office in 2013 as a candidate for Virginia attorney general, coming in second place in the Democratic primary.

During his run for lieutenant governor in 2017, he garnered a key endorsement from former President Barack Obama.

"He didn't grow up with much, but with scholarships, a hard-working mom, he went to college and law school and chose public service to make sure other striving young kids could have the same opportunities," Obama said of Fairfax at a Richmond, Virginia, rally in 2017.

When he was sworn into office, Fairfax carried the manumission documents that freed his great-great-great grandfather from slavery.

He also took a moment to slam President Donald Trump, saying, "We now have a chance to rise to the better angels of our nature, to take our country on a different, more positive course, to turn back from the political darkness that we are seeing out of Washington and out of this White House."