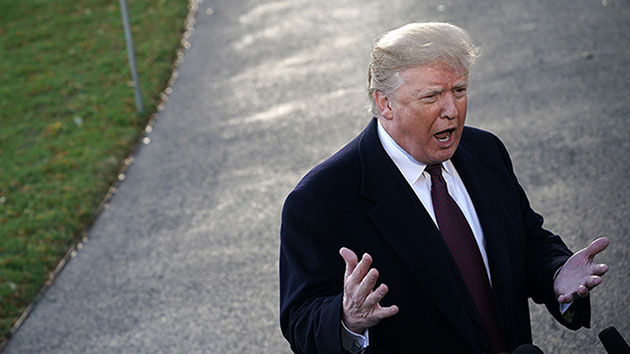 Alex Wong/Getty Images(PALM BEACH, Fla.) — PAAs President Donald Trump spends Super Bowl weekend at Mar-a-Lago, his private Florida club, for the first time this year, Democrats in control of the House are renewing their focus on Trump’s sanctuary — a property that Democratic lawmakers say presents a tangle of ethical and security concerns for a sitting president.
While he canceled a trip to Palm Beach for the Christmas holiday during the government shutdown, Trump has traditionally spent holidays and dozens of winter weekends at Mar-a-Lago, where members who pay hundreds of thousands of dollars have the opportunity to discuss news of the day and the administration’s agenda with the nation's commander-in-chief, who is known to survey guests and members for their opinions on a spectrum of domestic and international affairs.
Since taking office in 2017, Trump has spent roughly 75 days at Mar-a-Lago, according to an ABC News analysis of the president's schedule. Virtually nowhere else in the world is access to Trump as surprisingly free-wheeling and informal as it has been inside the gates of his 20-acre waterfront property.
The club reportedly has nearly 500 members, including New England Patriots owner Bob Kraft and real estate mogul Richard LeFrak. For a $200,000 membership fee, any member might cross paths with the president, whether on the resort's poolside patio, its manicured lawns or its gold leaf-lined interior rooms.
Trump has also installed club members in his administration: his ambassador to the Dominican Republic, Robin Bernstein, is a longtime club member. Last year, Trump nominated Lana Marks, a handbag designer and Palm Beach resident who is reportedly also a Mar-a-Lago member, as the ambassador to South Africa, where she was born.
He’s also used the beach club as the setting for summits with world leaders, including Japanese Prime Minister Shinzo Abe and Chinese President Xi Jinping.
“Mar-a-Lago points out a number of different ways in which the president’s businesses can create real ethical problems,” Noah Bookbinder, the executive director of Citizens for Responsibility and Ethics in Washington, a liberal watchdog group, said in an interview.
“It’s got people who pay a lot of money — that essentially goes to Donald Trump — to be there, and that really creates the possibility of influence,” he said.
The club has already been the subject of a number of investigations by the federal Government Accountability Office (GAO), the nonpartisan congressional watchdog agency.
After reports and social media posts suggested that Trump and Abe discussed national security in front of diners on the club’s patio following a North Korean missile test in 2017, the GAO spent months investigating security protocols at the club at the request of Democrats. A public version of the report is expected to be released in the coming weeks, GAO spokesman Chuck Young told ABC News.
“One of things that we have been concerned about is security,” Rep. Elijah Cummings, D-Maryland, chairman of the House Oversight Committee, recently told ABC News. “We don’t know how safe it is from a communications standpoint.”
Democrats have also asked the GAO to review the costs associated with presidential travel and protecting Mar-a-Lago, and whether the U.S. Treasury has received any payments from profits from the president’s club and other hotel properties.
They have also asked the agency and the Department of Veterans Affairs' inspector general to investigate whether members of Mar-a-Lago have improperly influenced decisions at the VA, following reports that three members played a role in shaping agency policies and contracts.
In December, ahead of taking control of the powerful Oversight Committee, Cummings issued more than 50 document requests, including a letter to the Trump Organization and the president’s lawyer about Trump’s arrangement to avoid conflicts of interest regarding foreign payments to his hotels and other businesses.
Cummings and other Democrats believe Trump may be violating the emoluments clause of the U.S. Constitution through his organization’s business with foreign governments and foreign-owned entities.
The results of the GAO investigations could turn the spotlight back on Trump’s favorite Florida getaway, and prompt hearings and further investigations on Capitol Hill.
“That whole question of whether the president is acting — when he makes decisions, making decisions — in the best interests of the country or himself will always be something we will be interested in,” said Cummings.
Copyright © 2019, ABC Radio. All rights reserved.