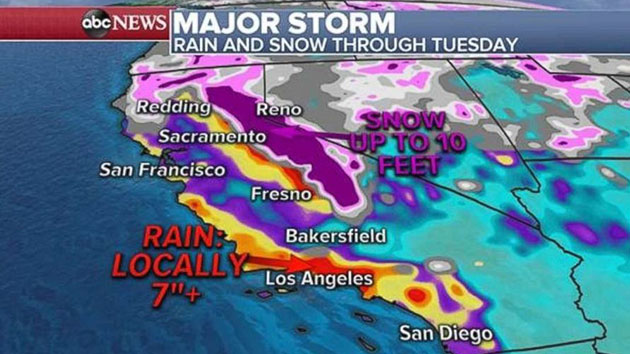 ABC News(NEW YORK) — A major Pacific storm moving onshore in California on Saturday morning will bring numerous hazards, including a high risk for flash flooding along the Southern California coast.
Heavy rain will move into parts of the Los Angeles and San Francisco metropolitan regions Saturday morning.
Rainfall rates over 1 inch per hour are expected to move into Southern California early Saturday morning and last through much of the day. The intense rainfall rates could bring 3 to 6 inches of rain in Southern California, especially in Santa Barbara and Ventura counties.
Given the widespread 1 to 3 inches of rain earlier this week in this region, there is a high risk of flash flooding Saturday in Southern California. Additionally, heavy rain could cause mudslides and debris flows, especially in the areas of burn scars.
In addition to the rain, strong winds are expected, with 40 to 60 mph wind gusts expected in Los Angeles and San Francisco. In the higher elevations, gusts of 80 mph are possible. This wind could cause downed trees and power lines.
A few more impulses will bring additional rain to the region through the weekend. Through Tuesday, 7 inches or more of rain is possible locally along the California coast and up to 10 feet of snow is possible in the Sierra Nevada Mountains.
After a brutal week of cold weather, the Midwest will warm up significantly this weekend. Already on Saturday morning, temperatures are 10 to 30 degrees warmer than they were just 24 hours ago from Kansas to Michigan.
Parts of the Midwest will see temperatures in the 30s and 40s, which is already feeling at least 40 to 60 degrees warmer than it was midweek in areas such as Chicago and Minneapolis.
The mild air will get picked up by a system later in the weekend, and temperatures will be into the 40s to near 50 by Monday from Kansas City to Philadelphia, including Chicago and Detroit.
By Tuesday, the warm air will reach the East Coast with temperatures in the upper 50s and possibly some low 60s in the major Northeast cities. That will be a nearly 50-degree warmup from temperatures Saturday morning in those locations. Additionally, it is looking like the Northeast will have sun most of Tuesday as well, making it the nicest and most comfortable day in weeks for the region.
With this rapid warmup, there will be an increased risk of ice jams and therefore river flooding in the Midwest and Northeast.
Copyright © 2019, ABC Radio. All rights reserved.