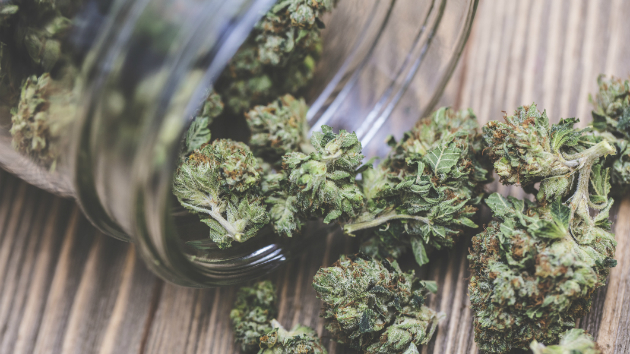 LPETTET/iStock(NEW YORK) — Super Bowl LIII commercials on Sunday will feature everything from a Stella Artois spot starring Sarah Jessica Parker, a Doritos ad featuring Chance the Rapper and the Backstreet Boys, and Cardi B, Steve Carell and rapper Lil' Jon in a commercial for Pepsi.
Amid the buzz over the star-studded lineup, one ad that was rejected by CBS News has sparked a conversation of its own about the evolution and the stigma surrounding medical and recreational marijuana in the U.S.
Investment company Acreage Holdings, one of the largest cannabis companies in the country, announced last week that their ad touting the benefits of medical marijuana was rejected by CBS News and according to the company's Founder and CEO Kevin Murphy, "the simple reason was that they are not taking ads for medical cannabis at this time."
"I’m not certain that we were terribly surprised but we were certainly disappointed," Murphy told ABC News in a phone interview Tuesday.
"It has been our belief that cannabis has come so far, so fast and it really isn’t the stigma," he added. "We’ve grown though the stigma and really our thinking was that the time is now, that CBS would be welcoming to our messaging, but unfortunately, we may have to wait until next year’s Super Bowl."
Although marijuana remains illegal under federal law, medical marijuana use has already been legalized in 32 states, and 10 of those states have also legalized recreational marijuana use for adults.
ABC News has reached out to CBS but a request for comment was not returned.
But the network reported that they shared the following statement with Acreage upon rejecting the ad: "Under out broadcast standards, we do not currently accept cannabis-related advertising."
CBS also reported that they asked to see the ad but that Acreage didn't provide it.
When asked about this, a spokesmen for Acreage told ABC News on Thursday that "CBS was provided the story boards" and the ad "was rejected based on the storyboards."
Murphy said that Acreage hasn't "done large ad campaigns historically," but they put the ad forth as more of a public service announcement to educate people about the benefits of medical marijuana.
"Our goal in delivering this 60 second message had nothing to do with any of our project offerings or any of our stores… it had everything to do with educating and highlighting how powerful cannabis can be for children with epilepsy, veterans suffering from pain management and folks who are currently addicted to opioids," he said.
Philadelphia Eagles defensive end Chris Long tweeted an apparent sarcastic critique of CBS' decision, writing, "Keep pumping the booze ads, guys. You’re doing great!" in response to a news report about the ad's rejection.
Comedian Jimmy Kimmel also mocked the decision in a segment on Jimmy Kimmel Live.
"It's funny CBS won't run ads for marijuana but they're perfectly fine showing Clydesdales kicking field goals — something you'd need to be very high to believe happens," Kimmel said, in an apparent reference to a famous 1996 Budweiser Super Bowl ad, featuring the beer manufacturer's iconic Clydesdale horses playing football.
The Clydesdales have been appearing in Budweiser commercials for years and in this year's commercial, promoting wind power and renewable energy, the horses are pulling a carriage down a country road and atop the carriage is a Dalmatian enjoying the breeze to the sound of Bob Dylan's "Blowin' in the Wind."
In the segment poking fun at the CBS' decision, Kimmel also features dogs, with a fake ad promoting "Air Buds" — marijuana for dogs.
There are "hundreds of strains" of "Air Buds," according to the fake ad, including "Scooby Dooby," "Bow-ie Wowie," "420 Dalmatians," "Pup Pup Pass" and "Who Smoked the Dogs Out?"
"While cannabis might not get a shout-out during the Super Bowl, the ad has found a home on 'the Puppy Bowl,'" Kimmel said.
On Sunday, the New England Patriots and the Los Angeles Rams are set to face off in Super Bowl LIII in Atlanta, Georgia.
Copyright © 2019, ABC Radio. All rights reserved.