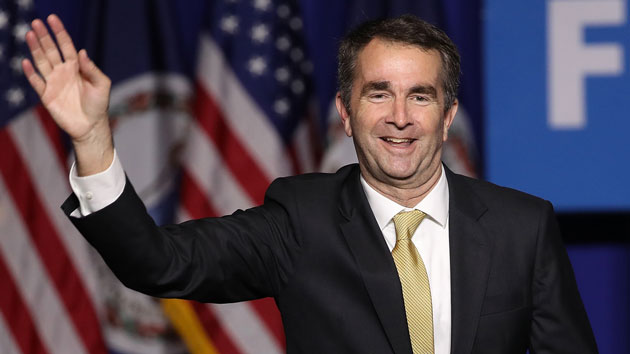 Win McNamee/Getty Images(ALEXANDRIA, Virginia) — Virginia's Democratic Governor Ralph Northam is facing questions tonight after a photo depicting two men, one in a Ku Klux Klan robe and another in blackface, appeared on a medical school yearbook page with his name on it.
The picture appeared in a "student-produced" publication in 1984, according to Jennifer McCarrell, the director of marketing and communications at Eastern Virginia Medical School (EVMS), where Northam graduated from and from which the yearbook page originated.
"I can confirm that the picture in question does appear in a 1984 student-produced publication," McCarrell wrote in an e-mail to ABC News. "The EVMS library is open to the public and does provide access to its materials."
The page in question is emblazoned with the name "Ralph Shearer Northam" at the top.
In a statement released Friday evening, Northam apologized and acknowledged that he is one of the men depicted in the photo.
"Earlier today, a website published a photograph of me from my 1984 medical school yearbook in a costume that is clearly racist and offensive," Northam wrote, "I am deeply sorry for the decision I made to appear as I did in this photo and for the hurt that decision caused then and now."
However Northam did not say that he would be resigning his post as governor, and did not say whether or not he was the person in the Ku Klux Klan robe or the one in blackface depicted in the photo.
"I recognize that it will take time and serious effort to heal the damage this conduct has caused. I am ready to do that important work. The first step is to offer my sincerest apology and to state my absolute commitment to living up to the expectations Virginians set for me when they elected me to be their Governor," Northam added.
Democratic presidential candidates including California Senator Kamala Harris and former Housing and Urban Development Secretary Julian Castro have called on Northam to step down.

Leaders are called to a higher standard, and the stain of racism should have no place in the halls of government. The Governor of Virginia should step aside so the public can heal and move forward together.

It doesn’t matter if he is a Republican or a Democrat. This behavior was racist and unconscionable. Governor Northam should resign.

Calls from other prominent groups on the left for Northam to resign began to emerge Friday night as well, including from MoveOn, a leading progressive group, and Gut Cecil, the head of Priorities USA, a major Democratic super PAC.
Derrick Johnson, the President of the NAACP, also called on Northam to resign.

Black face in any manner is always racist and never okay. No matter the party affiliation, we can not stand for such behavior, which is why the @NAACP is calling for the resignation of Virginia Governor @RalphNortham

— Derrick Johnson (@DerrickNAACP) February 2, 2019
Northam was elected in 2017, defeating former Republican Party Chairman Ed Gillespie, in a year in which Democrats nearly retook the Virginia House of Delegates for the first time in decades.
Numerous high-profile Democrats, including former President Barack Obama and former Vice President Joe Biden, campaigned for Northam.
The head of the Virginia Republican Party called on Northam in a Friday statement to resign if the governor is, indeed, depicted in the picture.
"Racism has no place in Virginia,” said Virginia GOP Chairman Jack Wilson. "These pictures are wholly inappropriate. If Governor Northam appeared in blackface or dressed in a KKK robe, he should resign immediately."
Under the Virginia Constitution, if Northam resigns, he would be succeeded by his Lieutenant Governor Justin Fairfax, a 39-year-old African-American former lawyer who is considered a rising star in Virginia Democratic politics.
A spokesperson for Fairfax declined to comment to ABC News on the yearbook photo controversy.