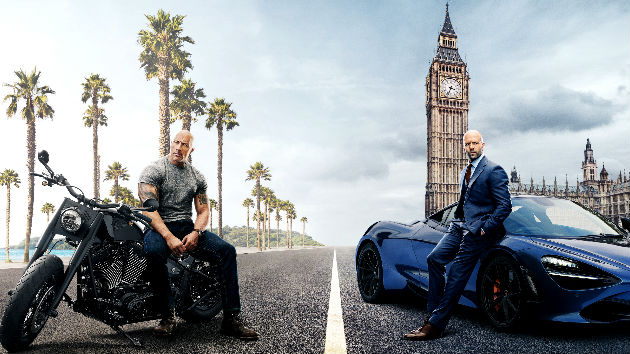 Universal Pictures(LOS ANGELES) — For a movie series that went from stealing DVD players from 18-wheelers to staging a chase on a glacier with a nuclear submarine, it's safe to say the Fast & Furious movies managed to up the ante in 19 years since they began.

Now, the trailer for the 5.1 billion dollar-generating series' first spin-off, Fast & Furious Presents: Hobbs & Shaw, has arrived, and it's not skimping on the crazy.

The snippet begins with Idris Elba's Brixton proudly declaring he's a genetically modified superhuman, enhanced to be bulletproof, super strong, and basically as perfect as you'd expect someone who looks like Idris Elba to be.

The movie was directed by stuntman-turned filmmaker David Leitch of Deadpool 2 fame, and as one would expect, the action is over the top, soundtracked ironically by War's "Why Can't We Be Friends."

The reluctant partners are shown plowing through enemies with vehicles, guns, and fists, capped by Hobbs free-falling from a skyscraper to catch an enemy who's running vertically down its surface, Tom Cruise, Mission: Impossible style.