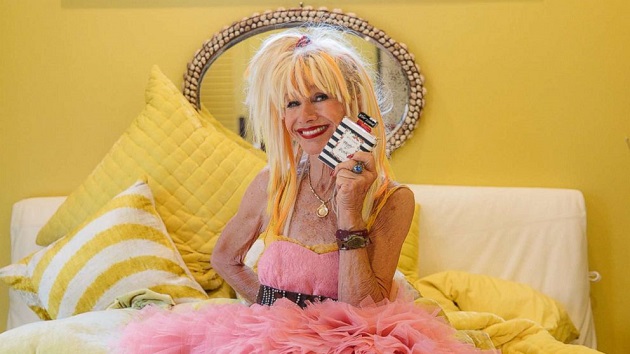 Courtesy Betsey Johnson(NEW YORK) — There’s no doubt about the fact that Betsey Johnson is one-of-a-kind. The 76-year-old fashion designer is known for her bright clothes and her even brighter personality.
Johnson’s fashion empire celebrates femininity and strength and has spanned decades, but the designer is the first to admit she never expected to end up here.
“I never wanted to go near fashion,” Johnson told ABC News' Good Morning America. “I just loved sewing and I just wanted to keep doing it.”
ABC took a trip down memory lane with Johnson to learn more about her journey to becoming a fashion icon and why being yourself never goes out of style.

Do everything until you find your one thing
Although she’s a designer by trade, Johnson’s first love was dancing.
“That was my fantasy world, my dancing years,” she said, adding that her mother made all her costumes despite how much she “hated sewing.”
Johnson took dance classes while she was growing up in Connecticut. Although it wasn’t her only pastime as a child, it was the one that captured her heart the most.
“You start to love so much [that] you just try to do it all and somehow it becomes a focus,” she said.

It's OK to be weird
Despite her mother’s aversion to sewing, the activity soon became Johnson’s passion.
“This is what I love, making clothes,” Johnson told GMA.
As a teen, she would take inspiration from her doll’s costumes and make dresses for them. Little did she know that these little costumes would ultimately launch a fashion empire.
“I didn’t ever sit and go, ‘That was a good look,’” she said.
Johnson’s style has always been unapologetically her own.
“I knew there were more girls like me. I just knew it,” she said.
You need a little luck in life
The ultimate spark in Johnson’s fashion career came in 1965 when she won a Guest Editor Contest for Mademoiselle magazine.
Her foray into the fashion industry even took her by surprise.
Johnson studied art in college but never took a fashion course in her life.
“I just loved sewing and I just wanted to keep doing it,” she explained.
Her grit and passion made up for her lack of industry experience. After a decade of working with various designers and boutiques, Johnson launched her own fashion line in 1978.
“I have talent. I work really hard … and I’m lucky,” she adds.
Having a kid won't cramp your style
While running her new fashion label, Johnson was also able start a family.
“Look how happy I am,” Johnson exclaims in this photo with her daughter, Lulu.
Having a kid was always a lifelong dream for Johnson and being a mom while also running a booming business made for a very unique experience.
From Hong Kong to Turkey, “I took Lulu all over the world,” Johnson said.
Be an icon, not a celebrity
Johnson reconnected with her first love of dance when she joined the cast of ABC's Dancing With The Stars in 2014.
She described the experience as “terrifying” yet “wonderful.”
Although she was eliminated after the fourth week, the fashion designer was blown away by the support she received from fans.
“They’ll come over and hug me,” Johnson said, adding that fans would often share “stories about what my clothes did for them.”
Tell the story you want to tell
Forty-one years after launching her eponymous fashion label, Johnson has solidified herself as a force to be reckoned with in the fashion industry — and shows no signs of stopping.
“Even working within a corporate level, I still love my brand,” she said.
Hearing Johnson talk about her new “Pretty N Punk” fragrance, it’s obvious that her excitement and passion for her job is stronger than ever.
She explained that she chose the name for the perfume because it epitomizes her brand — fierce and feminine.
“I love what it represents … [my company] has kind of had the same pretty and punk attitude,” she said.
Trends may come and go, but for Johnson, embracing your individuality never goes out of style.