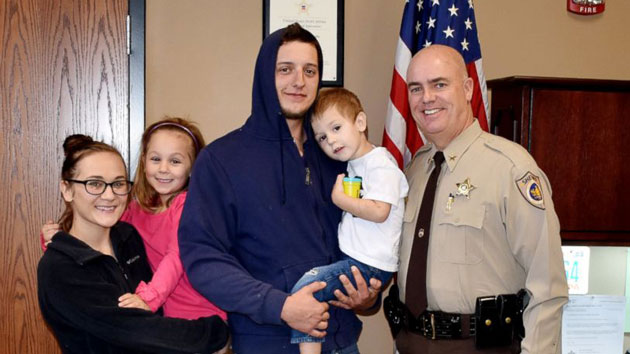 Craven County Sheriff's Office(Craven County, N.C.) — A 3-year-old North Carolina boy found alive two days he went missing has reunited with the authorities who spent over 48 hours searching for him.
Casey Hathaway, who was in good condition when he was found January 24 in wooded Craven County, visited the Sheriff's Office on Thursday with his family.
Officials posted the adorable photos of Casey to the sheriff's Facebook page.
"Casey is doing well," it read.
Casey was playing with two other children on Jan. 22 when he disappeared from his grandmother's home. His grandmother and others searched for about 45 minutes and then called 911.
After two days of desperate searches for the little boy, crews responded to a report of a child crying in the woods and found Casey "about 40 to 50 yards in the woods, tangled up," Craven County Sheriff Chip Hughes told ABC New Bern affiliate WCTI hours after he was found.
Casey was soaking wet but had his coat on, Hughes said, and "he wanted water — and his mom."
"He did say that he had a friend in the woods that was a bear," the sheriff added.
"What he survived out there — temperatures in the 20s, low 20s, the rain, the downpour that almost put our search on a standstill," Hughes said. "This kid, he’s strong. He was meant to survive. He’s a survivor.”
The little boy was rushed to the hospital.
"Just the look on his face when his little sister came in the room, it was tear-jerking," Hughes said.