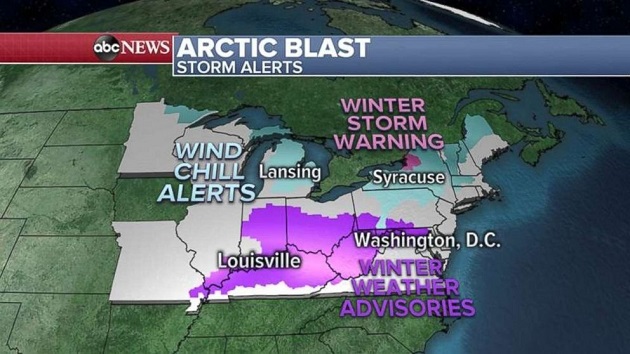 ABC NewsAs arctic blast eases, some cities will soon feel 50 to 100 degrees warmer
(NEW YORK) — The deadly arctic blast is winding down with one last cold morning on Friday from the Midwest to the Northeast — ahead of temperatures this weekend that will feel 50 to 100 degrees warmer in some cities.
Cities including Moline, Illinois, and Cedar Rapids, Iowa, set records for lowest temperatures.

Friday forecast
Advisories for snow and lingering cold Friday stretch from Minnesota to Virginia and up to Maine.
Lake effect snow is ending Friday in western New York, but not before nearly 4 feet of snow fell in parts of the area.
The arctic air mass passing over the Great Lakes created a heavy band with snowfall rates of 4 inches per hour.
As the milder air begins to move east, some snow was falling from the Ohio Valley to Washington, D.C., on Friday morning. The morning commute could be tricky in Washington and Baltimore with the light snow.

West Coast storms
Meanwhile, a series of strong storms will hammer the West Coast, especially California, through the weekend.
Some areas in central and southern California could see 4 to 7 inches of rain and flash flooding from San Francisco to Los Angeles.
Rainfall rates could climb to over 1 inch per hour in the Santa Barbara and Ventura County areas.
The rain is expected to hit recent burn areas, which could trigger mudslides.