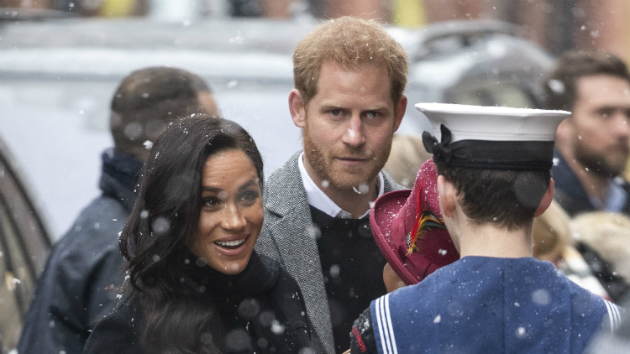 Mark Cuthbert/UK Press via Getty Images(LONDON) — As the U.S. begins to dig out from snow and sub-zero temperatures, Prince Harry and Meghan Markle stepped right into them during a trip to Bristol.
The Duke and Duchess of Sussex had a wintry welcome to the English city, which is about 120 miles from their London home. Snow flurries fell as the parents-to-be, who are expecting their first child this spring, arrived for a day trip to meet with locals and experience some of the city's culture.
Harry, 34, and Meghan, 37, did not let the near-freezing temperatures and snow stop them from greeting well-wishers, including a group of school children, who also braved the cold to see them.
Meghan is no stranger to cold weather, having lived in Toronto while she filmed the hit legal drama Suits. She left the show after getting engaged to Harry in 2017.
Meghan and Harry started their visit to Bristol by touring the Old Vic theater, the "oldest continuously-working theatre in the English-speaking world," according to its website.
The couple also got to watch a workshop with local school children who are part of the Old Vic’s community outreach program.
Later in the day, Meghan and Harry will visit a boxing studio, Empire Fighting Chance, that uses boxing to reach young people in need.
Friday's visit to Bristol is Meghan’s third public appearance of the week, but her first joint appearance with Prince Harry.
Earlier in the week, Meghan visited the National Theatre and the Association of Commonwealth Universities, two of the four charities for which she is now patron.
Copyright © 2019, ABC Radio. All rights reserved.