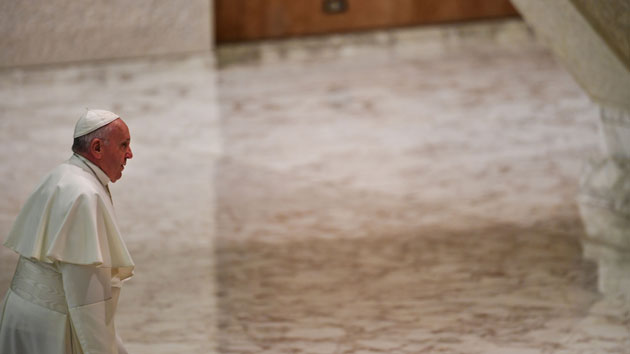 Andreas Solaro/AFP/Getty Images(LONDON) — Less than a week after returning from his last foreign trip, Pope Francis sets off Sunday on a trip to the United Arab Emirates where he will celebrate the largest public open-air mass ever to be held in the region.
On his first full day in the city, the Pope will meet the crown prince, Sheikh Mohammed bin Zayed Al-Nahyan, as well as members of the International Muslim Council of Elders in the Sheikh Zayed Grand Mosque, and attend and speak at an important interreligious meeting together with about 700 people from different faiths in the region.
On Feb. 5, the second and final day of his visit, he will celebrate mass at the Zayed Sports City, which is built to contain 50,000 people. Over 130,000 people, mostly Catholic immigrants from Asia working in the region, have received tickets. Those who cannot find a place in the stadium will watch the mass on giant screens in the surrounding area. The Pope will tour the crowds inside and outside the stadium while inside his popemobile.
The Pope will be greeted upon arrival and will be accompanied throughout his visit by the Grand Imam Al-Azhar from Cairo. This will be the fifth time these two religious leaders have met.
The first pope to visit the Arabian peninsula, his visit is seen as momentous for the Muslim region and especially important for the UAE, which is currently celebrating its ‘Year of Tolerance’ and wants to be seen as a peace-building nation, especially between people of Christian and Muslim faiths.
Critics of the UAE’s record on human rights and the country’s involvement in the war in the neighboring state of Yemen hope the pope will use the visit to speak out against these and other issues in the region.
Copyright © 2019, ABC Radio. All rights reserved.