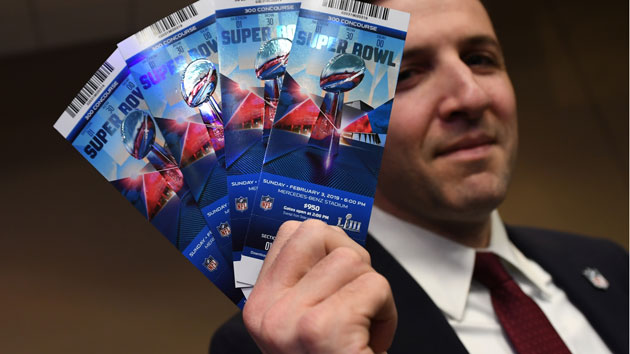 TIMOTHY A. CLARY/AFP/Getty Images
Posted on February 1, 2019 by ABC News

TIMOTHY A. CLARY/AFP/Getty Images(ATLANTA) — A Georgia man is accused of collecting hundreds of thousands of dollars for promised tickets to the Super Bowl appears to have gone missing, according to local police.
More than a dozen people who spoke with Gwinnett County Police — including the man's mother — said they gave money to Ketam Shah for tickets to the Super Bowl, which will be held Sunday in Atlanta.
In total, alleged victims have told police that Shah has nearly three-quarters of a million dollars of their money, Cpl. Wilbert Rundles of the Gwinnett County Police Department told ABC affiliate WSB.
According to police reports reviewed by ABC News, Shah’s mother told police she gave him $36,000 last year to buy Super Bowl tickets, with the promise that he would sell the tickets and give her the profits. Shah is not currently facing any charge. Police officials said they are investigating the complaints.
Another alleged victim, John Michael Brunetti, told police he purchased 10 tickets valued at $50,000 total after his brother told him that Shah would sell tickets to the first 250 people who sought to purchase them.
Brunetti said he called Shah’s business, Digital Xpress Printing in Norcross, Georgia, where Shah’s wife informed him that Shah had not been heard from since Jan. 3.
“I had a signed contract," Brunetti told WSB. "I thought that I'd covered everything, except for ‘hey, will this guy possibly abandon all this to flee to another state or country?’”
Shah’s daughter and wife both told police that they did not know of a plan by Shah to sell the tickets until they were contacted by two of the alleged victims. They told police that Shah had previously disappeared, gone to Las Vegas, Nevada, and returned, and that his wife and daughter told police they suspected that he had taken the Superbowl ticket money and gone back to Las Vegas “as part of a midlife crisis,” according to police reports.
Other reports claim that alleged victims from across Georgia sent Shah amounts including $20,000, $30,000 and $54,000.
The reports also said Shah took out a $500,000 loan against his business, which he co-owns with his wife and daughter, from a Columbus, Georgia business. The loan, according to the police reports, was purportedly taken for an event at an arena during the Super Bowl.
Another resident who told police his brother-in-law had wired $10,000 to Shah for two tickets described him as “a well-known citizen in the community” and “very convincing.”
“It’s not that he posted some ad and random people are contacting this guy for tickets and being scammed," Rundles told WSB. "He’s known these people for many years. One of them, he’s known his whole life because it’s his own mother."
Rundles told ABC News that possible charges in the case may include theft by deception and more depending on the investigation, but that Shah “still has a few days to make good on the deals.”
Copyright © 2019, ABC Radio. All rights reserved.