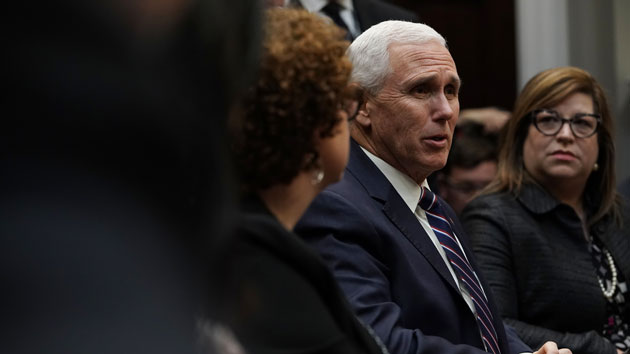 Alex Wong/Getty Images(MIAMI) — Vice President Mike Pence held a roundtable discussion with exiles from Venezuela in South Florida on Friday, vowing to stand with them "until the suffering is over and freedom is restored" and reinforcing the Trump administration's support for opposition leader Juan Guaidó.
"On behalf of President Donald Trump, let me assure you, we are with you. The American people are with you," Pence told the group of exiles, calling them "courageous."
Pence's trip to Miami came as the Trump administration continued to challenge Nicolas Maduro's claim to the presidency. Pence called him a "dictator."
"We're very moved by all the stories we've heard but by the clear intention by each of you to speak on behalf of all of those others who have gone through what you've gone through and are still going through it right now," Pence said.
Some of the exiles thanked the administration for its support and told personal stories of opposing Maduro's regime and having to flee the country.
One exile, George Arellano, described how he and his wife escaped.
"It was a very traumatic crossing because of lack of transportation, lack of gas, lack of cash — innumerable technical difficulties to get out of the country," Arellano said through a translator.
After fleeing to the United States, Arellano said his father was kidnapped back in Venezuela. Arellano said the threat to his father's life forced him to end his political activism.
Although Arellano, along and his wife Mayra Lopez, left a year ago, they say the problems back home have only gotten worse.
"It's very hard to have a fractured family. We had to leave our family behind … the situation is terrible," she added.
Rafael Gottenger, a Miami-based doctor, expressed concern about a shortage of doctors and medical supplies.
"Just a week ago, we remembered the Holocaust. I am a Holocaust descendant. My father and mother were in the Holocaust, "Gottenger said.
Holding up photos of sick children, he said he was in disbelief that the world is confronting another political and humanitarian crisis. "Now we see the opportunity for the reconstructive of the Venezuelan health care system," Gottenger said.
He told Pence and other elected officials that aid efforts need to begin immediately.
"We've been working years to try and open up that humanitarian aid that we need for Venezuela," he said.
Pence thanked Sen. Rick Scott, Sen. Marco Rubio, Gov. Ron DeSantis and Rep. Mario Diaz-Balart, all Republicans who came to the round table discussion, for their continued support.
"Those of us in public service often get a chance to do very meaningful things but rarely do we get a chance to do historic great things and the cause of freedom is historic and great," Rubio stated.
Following the roundtable discussion, Pence gave remarks at Iglesia Doral Jesus Worship Center in Doral, Florida, reinforcing the administration's strong support for Guaidó following threats by Maduro against the opposition leader's family.
"The safety and security of Guaidó and his family are of great importance to the American people," Pence said.
Copyright © 2019, ABC Radio. All rights reserved.